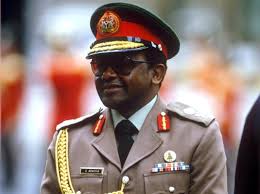 The late Nigerian military head of state, General Sani Abacha’s personal doctor, Professor Sadiq Suleiman Wali, who discribed the late dictator as ‘a quiet person, calm person that normally he didn’t talk much’, in a new interview, has shed a light on the circumstances of his mysterious death, breaking 17 years of silence.
Professor Wali who was always in the presidential entourage, served as physician to the three previous Nigerian heads of state after being recruited in that role in the early 1980-s. He considered himself politically neutral and lived outside the sprawling heavily guarded Aso Rock in Abuja.
He says Abacha’s health was not so serious  before his death. “Abacha was generally healthy though he had some health issues, he was treated, he’s responded [to that treatment] very well. He didn’t have any heart-related diseases at that time.”
On the 7 of June, 1998, Abacha hosted the Palestinian leader, Yasser Arafat and all seemed well. The next morning, the General was due to fly to the OAU summit being held in Burkina-Faso and professor Wali was due to go with him. Professor Wali recounts that “around 6 am I had a phone call from his security officers, and they said, ‘please come, come to the villa, come urgently!’  Before I even could get ready, they came and picked me. I had no idea what it all was about.”
The car carrying the doctor sped towards the presidential villa through a special entrance – a shortcut which only the president was allowed to use. The doctor realised something was seriously wrong.
“I arrived then I saw chief security there and he said ‘doctor come in, please, come in!’ We all rushed and I just saw the president. There was another doctor who came earlier, resuscitating him. Abacha was in the sitting room. He was on the couch. He was in his normal work clothes. I didn’t panic. I’ve seen a lot of serious problems before in my practice, but to affect him was very tough, definitely. I joined and we did as much as we could to resuscitate him. But I realised that he was dead because he was fuming. We just continued resuscitation and even injected some things, but it didn’t work.”
40 minutes later after trying to resuscitate the general, Professor Wali said Abacha had died. “I said, sorry – there’s nothing we can do”.
In a country prone to coups, there was no immediate public announcement, Abacha’s head of security first increased the guard around the presidential complex and then called the heads of the armed forces to gather to decide on his replacement.
“Immediately the security officer took over, and he invited all the service chiefs to come to Abuja, by then most of them were based in Lagos. When the service chiefs arrived, some of them asked to see the body to pay their respect to their former leader. They wanted to make sure, that he is dead. And some of them were crying” – Wali recalls.
Professor Wali was determined that there should be an autopsy to find out what caused the sudden heart attack. After much deliberating, the family declined, preferring the quick burial in line with Islamic tradition. But the doctor was determined to find some clues as to what have happened.
“I still try to take some samples of blood and urine and hair and things like that, just thinking for the future chemical tests. it’s very difficult to say [whether he died of natural causes]. What I can see. The blood test we did, has shown some raised cardiac enzymes [proteins that are released into the blood by dying heart muscles].That’s why we thought maybe it was cardiac attack.”
There are rumours that he was poisoned, or that he spent a night entertaining young ladies. Speaking on the rumours, Professor Wali said:“when I entered [Abacha’s premises], there were no ladies. It might be true but I did not see them. Concerning the poison, as I said no post-mortem has been done, so I couldn’t assure whether he was poisoned or it was a heart attack.”
The mystery around Late Abacha’s death still continues seventeen years after his sudden and unexpected demise. May his soul continue to rest in peace!!!
Culled from Naij

The United Kingdom parliament says it will consider a petition asking the country to sanction the federal government for human rights abuses over the...
Read more