APC Team: Atiku, Nigerian by Referendum, Not Birth, Says a person must be citizen by birth to contest election under 1999 Constitution

A member of the legal team of All Progressives Congress (APC) that packaged the party’s response to the election petition filed by the presidential candidate of Peoples Democratic Party (PDP), Alhaji Atiku Abubakar, has said citizenship is a trump card held by the ruling party against the former vice president. He claimed the fact that Atiku is not a Nigerian citizen by birth, and, thus, unqualified to contest the February 23 presidential election was a valuable constitutional resource that could give them advantage in the electoral litigation.

But Atiku, in a statement released yesterday by his media office, debunked the claims of the APC regarding his eligibility, saying the ruling party is attempting an unconstitutional redefinition of the term “Nigerian”.

That was as the Independent National Electoral Commission (INEC) defended its declaration of President Muhammadu Buhari as winner of the poll, in its own response to the main opposition candidate’s petition. INEC also said Buhari had the requisite educational qualification to contest the election.
The APC, in its response submitted to the Presidential Election Petition Tribunal last Friday, had stated that since the former vice president “is a Cameroonian and not a Nigerian citizen by birth,” his petition against Buhari should be dismissed because he was not qualified to contest the election.

The member of the APC legal team, who pleaded for anonymity, explained that the former vice president became a Nigerian citizen by referendum and not by birth, “so he is not qualified to contest for the Presidency of Nigeria, because the Nigerian constitution says only people who are citizens by birth can contest for the office of the President.”

He continued: “Recall that in 1961, a plebiscite organised by the United Nations was held in the British controlled part of Cameroon (British Northern and British Southern Cameroons). The referendum was to choose between joining a self-governing Nigeria or re-unification with sovereign Cameroun. On February 12, 1961, the results of the plebiscite were released and British Northern Cameroons joined Nigeria, while the southern part voted for reunion with the Republic of Cameroon.

“Our dear Atiku Abubakar was born on November 25, 1946 in Jada, situated in the then British Northern Cameroon. He was born a Cameroonian. Atiku is a Cameroonian citizen by birth and became a Nigerian by referendum. He is not a Nigerian by birth. We have to get that right. The 11.1m votes recorded in favour of Atiku is a waste, and should be voided by the tribunal.

“Another very vital thing to note is that the constitution of Nigeria has not been amended to make it possible for those who became citizens by referendum, based on the 1961 plebiscite in the British Cameroon, to be eligible to contest for the position of Nigerian president or any election in Nigeria. Until that is done, Atiku and others, who became Nigerians by virtue of that plebiscite, are not qualified to contest elections here. However, their children born after the plebiscite are Nigerian citizens by birth, and constitutionally qualified to contest elections in Nigeria.”

APC averred in its response sent to the tribunal that by reason of Atiku not being qualified to contest the election, “all votes purportedly cast for him and PDP in the February 23 election is lost votes.”

But the Constitution also forbids any form of discrimination, on the basis of race, religion and ethnicity.
Besides the issue of nationality, the APC asserted that most of the claims contained in Atiku’s petition had become statute barred and that the tribunal was not the appropriate forum to entertain them.

Furthermore, APC said the issue of educational qualification of the president-elect, raised by Atiku, “cannot be treated by the tribunal” because the period for claims and objections on such issues had expired and that the petitioners failed and neglected to use the period to challenge the validity of the educational qualification of Buhari as contained in the form CF001 submitted to INEC.
According to the party, since the petitioners have waved their rights to challenge the propriety of information contained in the form CF001, their petition no longer disclose any reasonable cause of action.

APC also faulted the allegation of non-compliance with relevant laws made by Atiku and PDP, adding that their failure to make specific references to the compliance issue had fatal effect on the petition and, therefore, the petition has no enough material to justify the grounds of any relief sought.
Atiku and the PDP had on March 19 filed the petition against the declaration of Buhari as winner of the February 23 poll.
Their petition, which was anchored on five grounds, prayed the tribunal to annul Buhari’s victory on grounds that the election was characterised by widespread rigging, violence and substantial non-compliance with electoral laws.

They also urged the tribunal to disqualify Buhari over alleged non-possession of requisite academic qualification for the office of president.
Atiku claimed to have scored the majority of lawful votes and prayed the tribunal to declare him the winner of the election.
In the alternative, the PDP presidential candidate prayed for an order cancelling the election and directing INEC to conduct a fresh one, which will conform to relevant laws.

But APC argued that Atiku’s failure to join the Nigerian Army, Nigeria Police and other security agencies, who performed the alleged harassment and intimidation, as defendants in the petition to establish his claim, was fatal to the petition and that the claims should be struck out. The party prayed the tribunal to uphold the victory of its candidate, President Buhari, who polled 15,191,847 votes to emerge winner and his subsequent declaration as president-elect by INEC, while also urging that the petition against the victory should be dismissed for having no cause of action.
No date has been fixed for the hearing of the petition.

Atiku, in a formal reaction to the APC allegations, titled, “On The All Progressives Congress’ Ridiculous Claims at the Election Petition Tribunal,” said the ruling party was attempting an unconstitutional redefinition of the term “Nigerian”.
The former vice president, in the statement signed by his media adviser, Paul Ibe, said, “The fact that the APC chose to base its defence on the ridiculous assertion that the Waziri Adamawa is not a Nigerian should show to Nigerians the type of characters we have in the APC and its government, whose legitimacy runs out on May 29, 2019.

“The position of the APC is so pedestrian and shows such straw clutching desperation on their part that I shall not dignify it with an answer. Our lawyers would, of course, do the needful in court. But the point I want to draw the attention of Nigerians to is that both the APC and its candidate have by this infantile logic admitted to the fact that they trampled on the will of Nigerians and that their only defence is to attempt an unconstitutional redefinition of the term ‘Nigerian’.

“I am, however, confident in the Nigerian judiciary, as well as in the Nigerian people. I trust that the tribunal will treat such a claim with the contempt it deserves. We must maintain our fidelity to the rule of law and to our fountain of origin, the 1999 Nigerian Constitution (as amended).
“Atiku Abubakar has served our nation diligently in various capacities, from the civil service, where he rose through merit to the top of his chosen field, to public service, where, by the grace of God, he was the Vice President of the Federal Republic of Nigeria. Moreover, he has committed his assets and talents to developing our nation through the provision of tens of thousands of direct jobs and hundreds of thousands of indirect jobs.

“I make bold to state that those who have made Nigeria the world headquarters for extreme poverty are the very people whose Nigerianness should be in doubt, and not a man, who worked with President Olusegun Obasanjo to double the per capita income of our nation in less than eight years.” 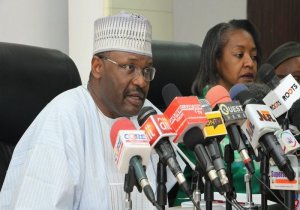 INEC mounted a staunch defence of Buhari’s victory at the February 23, 2019 presidential election. In its response to the petition filed by Atiku before the Presidential Election Tribunal, INEC also defended the educational qualification of Buhari.
The commission urged the tribunal to dismiss the PDP candidate’s petition for being incompetent and to uphold the declaration of the candidate of APC, Buhari, as the winner.

INEC filed a notice of preliminary objection supported with 11 grounds upon which it asked the tribunal to strike out Atiku’s petition. It said Atiku’s petition was incompetent because it did not contain the actual election results declared by it. It also argued that it was wrong for Atiku to claim that he won the election while at the same time asking the tribunal to nullify same because Buhari was not validly elected. The commission argued that no one could be declared winner of an invalid election.

The electoral body stated that card reader machines were merely used for authentication during the election. It said some of the grounds relied upon by Atiku were pre-election matters, which should not be brought before the presidential tribunal for adjudication.

The commission’s response was filed by Yunus Ustaz Usman, SAN, leading a team of other senior lawyers.
Contrary to claims by Atiku that votes were collated electronically, INEC said the collation was done manually.
While denying the existence of the table of scores, which Atiku attached to his petition, INEC said, “Any evidence contrary to what was recorded in the authentic documents of the 1st Respondent is false. Any such contrary document or information is false and was deliberately skewed, suborned and produced for the purpose of lending credence to the petitioners’ spurious contentions.”

INEC said Boko Haram did not stop people from coming out to vote for candidates of their choice in Yobe and Borno states.
It said, “Specifically, in respect of parts of states of the federation experiencing Boko Haram terror of threat, such as Borno and Yobe, the terror or threat did not adversely affect voters turn -out as voters turned out in large number to vote for candidates and political parties of their choice and at no time did the 1st Respondent (INEC) wrongly credit the 2nd Respondent (Buhari) and 3rd Respondent (All Progressives Congress) and of any political parties or candidate for that matter with any non-existent votes.”

The Nigerian Air Force (NAF) on Sunday described as outright falsehood report that its air component unit killed over 250...

Although it is barely 9 months into the second and final tenure of President Muhammadu Buhari administration, politicians within the...

A stalwart of the All Progressive Congress (APC) in Edo, Mr Peter Esele, has said that recent happenings in the...

Former Minister for Communication and chieftain of the All Progressives Congress (APC), Chief Adebayo Shittu has decried the crisis in...