Pendulum : The Atiku Challenge We Must Accept

Adamu Garba has taken to his official Facebook handle to claim that the Peoples Democratic Party (PDP) is playing a game on Atiku Abubakar, adding that they are managing him until they find their preferred candidate.

While sharing on his official Facebook handle, Adamu Garba said, “It seems to me that PDP is playing a game on Atiku Abubakar. They’re trying to manage him until such a time when they’ll shift him aside for their preferred candidate. A kind of political babysitting. Not so good”. 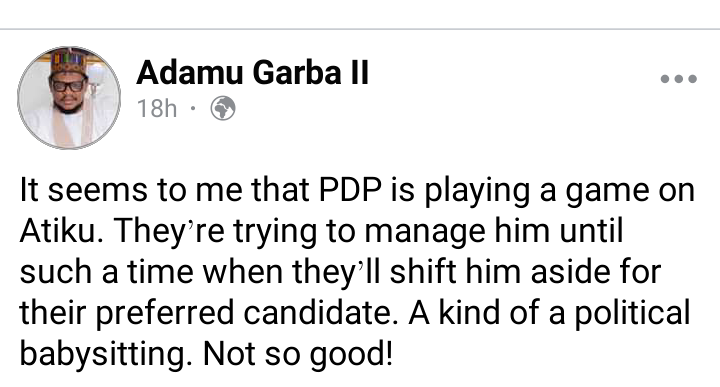 As we all know that Atiku Abubakar is a Nigerian politician and a businesswoman who served as the Vice President of Nigeria from 1999 to 2007 during the presidency of Olusegun Obasanjo, however, based on what Adamu Garba said, he claimed that the Peoples Democratic Party (PDP) are playing a game on him (Atiku Abubakar).

This post has attracted a lot of attention as many Nigerians took to the comment box to share their thoughts. The majority is of the view that Adamu Garba is right on this one, adding that Atiku Abubakar could make a better leader if elected as the president of Nigeria.

Former Minister of Education and Delta State gubernatorial aspirant, Olorogun Kenneth Gbagi, said it would be premature for the All...

The Governor of Ebonyi State, David Umahi, on Friday sealed the Salt Lake, which belongs to the senator representing Ebonyi...

No few than 2,000 members of the opposition All Progressives Congress (APC), from the 14 wards in Ukwa West Local...

Ex-President of the Senate, Dr. Iyorchia Ayu has emerged as consensus candidate for the National Chairmanship of the Peoples Democratic...

The governor of Kano State, Abdullahi Ganduje, has blasted a group of Kano politicians who wrote a petition to the...

Pendulum : The Atiku Challenge We Must Accept