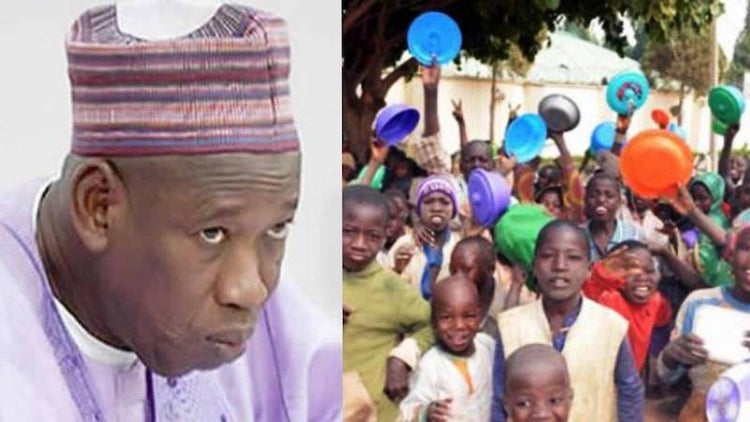 Kano Governor Abdullahi Ganduje has described Almajirai as breeding ground for COVID-19 because of their vulnerability as a result of poor hygiene and lack of shelter.

He said this Thursday at the opening of a training for a special Rapid Response Team to cater for over 2000 Almajirai stationed at three mega centres in Kiru, Karaye and Gabasawa in Kano.

He said, “From our investigation and data collected we have three types of Almajirai in Kano state. The first group are those Almajirai belongs to other states of the federation, second group are Almajirai who are indigenes of Kano state and the third group are Almajirai who cannot even mention where they come from or who there parents are, they have no where to go, some sleep under the bridges, markets, motor parks but because of the Coronavirus climate we are in now, we have already banned begging and all schools are closed, these Almajirai constitute hazards and they are breeding ground for Coronavirus. Because they stay in a congested environment, they have no defined place for them to sleep, no prescribed food for them to eat, no provision for sanitation and therefore they are vulnerable,” the governor stated.

Ganduje also said government decided to pay special attention to them by establishing the special response team to examine and protect them during the COVID-19 pandemic.

“We decided to examine all the Almajiris in Kano state. Our intention is to protect them and those who are negative we take them back to their parents, back to their states to ensure that they are free from coronavirus. Those who are positive, we are not taking them back to their states of origin. We are putting them in isolation centres until they are cured and are confirmed negative. Then we take them to their respective states in a good condition with certification from the Nigeria Centre for Disease Control,” he stated.

Meanwhile,Kano state government has quarantined over 2000 Almajiris to curb the spread of COVID-19 in the state, the second hotspot of the virus after Lagos state.

The state Commissioner for Health, Dr Aminu Tsanyawa, stated this on Thursday at the opening of the training for Rapid Response Team, RRT, to manage the Almajiris at their quarantine centres.

He said the trainees were selected from medical doctors, nurses, community health workers and laboratory scientists to test and screen the Almajirai at their camps in Kiru, Gabasawa and Karaye Local Government areas of the state.

The commissioner explained that the Almajiris, including those that had been repatriated from other states to Kano, would be tested for COVID-19

“They are all going to be tested for COVID-19 to know their status. Those with the disease will be taken to isolation centres while the negative ones be reunited with their families.

” We have over 2000 frontline health workers in Kano. Adequate Personal Protective Equipment, PPE had been provided for them to protect themselves. They are also working in public facilities. They work at both private and secondary health institutions,” the commissioner said.

The Presidential Task Force on COVID-19 pandemic, has joined the ranks of those appealing to ENDSARS protesters to embrace dialogue, reminding them that the...
Read more
Health