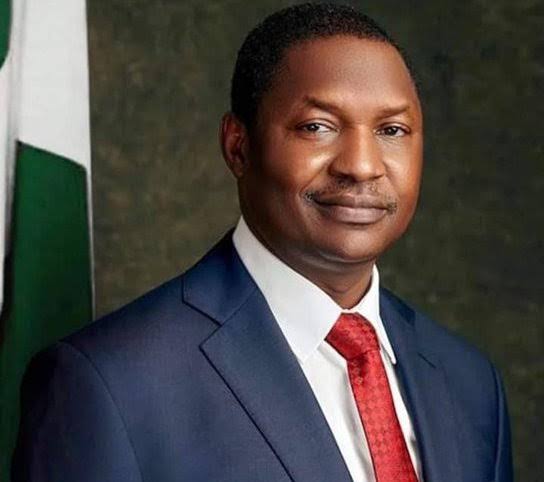 Prominent civil society groups involved in anti-corruption have written to President Muhammadu Buhari, informing him of 14 high-profile corruption allegations against the Attorney-General of the Federation and Minister of Justice, Abubakar Malami, OBSERVERS TIMES report learnt.

The allegations range from financial sleaze involving him and his family to influence peddling.

The groups in a joint letter sent to the President called for immediate probe of Malami.

According to Sahara Reporters, the letter was signed by Olanrewaju Suraju of Civil Society Network Against Corruption, Debo Adeniran of Centre for Anti-Corruption and Open Leadership, and Ezenwa Nwagwu of Say No Campaign

The groups said the immediate option before the Malami was to resign and give way for full inquiry into the grand allegations that seem to portray him as stunningly corrupt.

The statement reads, “It has to be now or never. There are very strong allegations of corruption against Mr Abubakar  Malami with clear evidence. President Buhari should act now. We have listed these corruption cases after painstaking compilation of high profile corruption cases involving the country’s No 1 law officer. The President must act without delay.

“We are perturbed by these reports considering the revered position occupied by Mr. Malami, being the number one law officer of the country. Some of the allegations as conveyed in the media reports go to the root of breakdown of law and order and total disregard for the rule of law. These allegations serve as a slap in the face to your Excellency’s administration foremost goal of ridding the Nation of corruption. These allegations are totally opposite the core objectives of your administration and international perception of the country.”

Top on the list is the alleged auctioning of vessels holding crude oil seized by the Federal Government, violating Section 31(2) and (4) of the EFCC Act 2004.

“The AGF also authorized the sale of these vessels by companies under EFCC prosecution for similar offence of illegal bunkering and this action was admitted by the AGF through his media aide pleading presumption of innocence on the part of the accused, in the case being prosecuted by the Federal Government through EFCC,” the statement added.

Continuing, it said, “The minister also barred the prosecution of the former Comptroller-General of Customs, Mohammed Inde Dikko, through a suspicious deal between the him and the Immediate past DSS Director on one side and the Comptroller General of Customs to refund $8 million to the Federal Government.

“The case was discontinued as Justice Dimgba refused to allow further prosecution of this matter under the guise that Mr. Dikko had kept his promise under the agreement by refunding N1,576,000,000 and more to the FG through the EFCC funds recovery account in the Central Bank of Nigeria (CBN). The FG earlier accused Mr. Dikko of stealing over N40 billion.

“Some of the properties listed in his name were a multimillion naira Rayhaan Hotels worth about N500million, located at opposite Aminu Kano Teaching Hospital, Zaria Road, Kano State, a property worth about N600million Naira locate at Ahmadu Bello Way, Nasarawa GRA, Kano, a newly constructed school at the back of Nitel at Gesse Phase 1, Birni Kebbi worth about N700million, a multi million Naira property built by Mr. Malami for his son located at Gesse Phase II in Birni Kabbi worth over N400 million, a mansion known as Azbir Arena allegedly built by Mr. Malami for his second son. Azbir Arena an entertainment centre worth over N3 Billion, with a big plaza and kids playing centre and hotel all combined in one expansive property.

“At ICPC, Mr Malami also displayed his unpretentious hatred for the fight against corruption by writing a letter dated 16th December, 2016 withdrawing the case of fraud filed against Mr. Godsday Orubebe, the former Minister of Niger Delta, in a case involving over N1.97billion, on the ground that in his opinion, there was no basis for filing the charge against him.”

“We strongly believe that the above allegations are deserving of thorough, immediate and urgent investigation through an independent panel of inquiry and the Attorney General suspended from office pending the conclusion of this investigation; the veracity or otherwise of these allegations is essential for the sanity of the public service.

“The law presumes any allegation as a suspicion until the suspect is so proven guilty; we as organizations, relentless in seeing transparency and accountability actualized and that due process is deployed in investigating corruption, abuse of power and office belief the allegations leveled against the Attorney General of Federation and Minister of Justice, Mr. Abubakar Malami is deserving of your urgent action.

“We believe in due process which is why we have forwarded this petition to your Excellency for proper and diligent investigation and timeous action in order to restore the sanity of the core mandate of your administration to fight corruption which is at the verge of collapse as a result of the alleged abuse of power and office by the incumbent Attorney-General and Minster of Justice.” 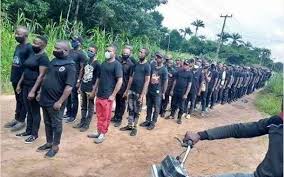 Members of the Indigenous People of Biafra (IPOB) and its militant arm, the Eastern Security Network (ESN) have reportedly stormed forests in Delta State to begin the enforcement of the government’s anti-open grazing law

SaharaReporters obtained a video where some of masked gunmen, believed to be ESN fighters, were shooting at cows reportedly wandering on farmlands.

It is not clear yet in which part of Delta State the incident happened.

Sources stated that the ESN fighters were also in Delta State over the threat issued through an anonymous letter written by killer herdsmen to the government.

SaharaReporters had on June 14 reported that President Muhammadu Buhari was not contemplating sending more troops as reinforcement to Delta State to quell the suspected Fulani jihadist threats, according to sources at the Defence Headquarters.

Two officers at the DHQ Abuja had told SaharaReporters that despite the fact that the Chief of Defence Staff, Gen Lucky Irabor, comes from Delta State, only Buhari, as Commander-in-chief of the armed forces, could direct the troops to move into Delta and secure the strategic locations in the face of the alarming threats.

It was learnt that the Federal Government could leave the threats to only the police, as military action by the Buhari government against the Fulani herdsmen is rare in southern Nigeria.

“The CDS is from Aliokpu Agbor, Ika South Local Government Area of Delta State, which is the epicenter of the jihadist warning. The governor might have called and discussed with him too. But the express directive to deploy troops to the state has to come from the C-in-C.

“So, the CDS has to tread carefully between safeguarding his home state and the body language of the presidency. But for now, there is no directive to the DHQ from the Villa to deploy more troops or act on Delta State, 24 hours after the threats are going viral,” one of the top sources had stated.

SaharaReporters two Sundays ago reported that palpable fear had gripped residents of Delta State following threats of invasion and bombing of the state capital, Asaba and Agbor, headquarters of Ika South Local Government Area of the state by a faceless ‘Fulani Jihadist’ group.

The group, which claimed responsibility for the fire incident that gutted the Federal Secretariat complex along Okpanam road, Asaba, warned Governor Ifeanyi Okowa to immediately withdraw his stand and support for the banning of open grazing in a recent southern governors meeting held in May and hosted by Okowa in government house, Asaba.

In an unsigned threat letter titled ‘Fulani Jihadist Warnings!!!: An Open Message of 2 Paragraphs to Delta State’ pasted in strategic places across the state capital and Agbor on Sunday, the faceless group warned Governor Ifeanyi Okowa against any failure to adhere to their demand for his withdrawal from the ban on open grazing within 72 hours, it would invade Asaba and Agbor. 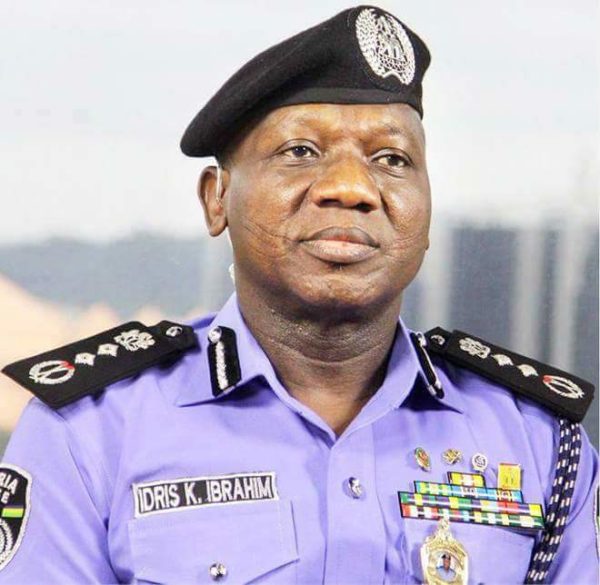 A Former Inspector-General of Police, Ibrahim Idris, has been asked to answer for about N250 million unapproved contracts as well as unremitted revenue at the Nigeria Police Academy, Wudil, Kano State, in 2018 when he was in charge of the Nigeria Police Force.

Idris served as the Inspector General between June 2016 and January 2019, and he is being asked to account for financial misappropriations at the police academy.

This query was contained in the annual report of the Auditor-General of the Federation for 2018, a copy of which was obtained by SaharaReporters.

The report alleged non-remittance of revenue, awards of unauthorised contracts as well as other financial infractions.

The audit report says, “Issue one; Non-remittance of Internally Generated Revenue; N46,457,934.92; Audit observed in the financial year 2017 that, out ofN56,740,802.87 being Internally Generated Revenue to the Federal Government, the sum of N46,457,934.92 was not remitted. The funds were received in cash and the Academy was not on the Treasury Single Account (TSA) system at the time. This indicates weaknesses in internal controls operated by the management of Police Academy, Wudil.

“The Inspector-General of Police is required to remit the sum of N46,457,934.92 being the unremitted Internally Generated Revenue (IGR) to the Treasury Single Account (TSA) maintained in the Central Bank of Nigeria. Sanctions in line with FR3112 (i) and (ii) should apply.

“Furthermore, the project was abandoned, the stage of work and the details of payment made before abandonment was not disclosed. A second variation cost for the review of the layer thickness was put at N49,950,125.65 thus bringing the final total contract sum to N204,942,446.22.

“The Inspector-General of Police is required to account for and justify the payment of the sum of N35,000,000 and to substantiate the genuineness of contract, failing which sanctions in line with FR3106 should apply.

“The Inspector-General of Police is required to provide evidence (Circular and signed agreement) to support the genuineness of the payment, or otherwise recover the sum of N15, 650,067.85.” 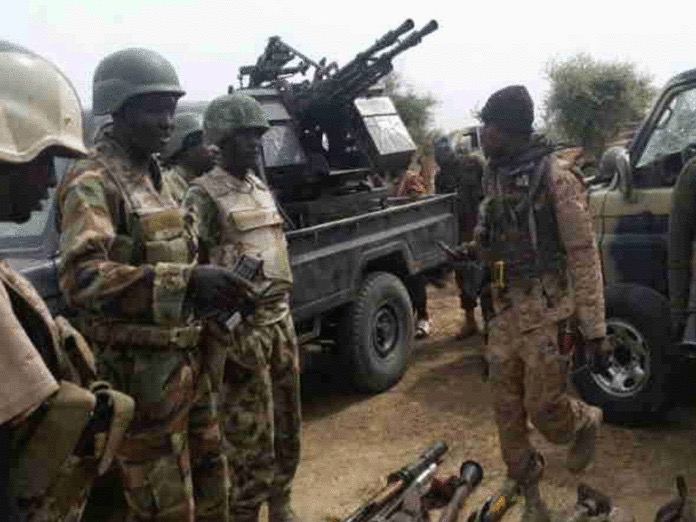 Troops of Operation Hadin Kai killed 26 insurgents in the North-east as the Chief of Army Staff, Maj.

Gen. Faruk Yahaya, yesterday ordered troops on the frontline to sustain the momentum of attacks on insurgents.

It said “troops overran the position of the terrorists with heavy volume of fire from both land and air, killing over 20 insurgents.

It said troops also captured heavy fire weapons and arms, including three anti-aircraft guns, three AK-47 rifles and two gun trucks, aside two other gun trucks that were destroyed by the troops.

In another statement, it said troops of Joint Task Force North East Operation Hadin Kai (OPHK) deployed at the Forward Operational Base (FOB) of 152 Battalion, Kumshe on Sunday, killed members of the terror group, Boko Haram.

The statement said the terrorists attempted to infiltrate the camp.

“The terrorists mounted on four gun trucks and several motorcycles attempted to infiltrate and attack the camp through the northern part of the troops’ deployment, but were met with the fierce fire of the highly alert troops, resulting in the instant killing of six terrorists.

“The troops, who remained dogged and sustained heavy gun fire on the terrorists during the encounter, routed and forced the terrorists to flee in total disarray, leading to the capture of six AK-47 rifles, one hand-held grenade, assorted drugs and other first aid items”, it said.

He enjoined the troops to sustain the ongoing offensive under Operation Hadin Kai until the insurgents were completely surmounted.

The COAS reiterated the commitment of the Nigerian Army under his leadership to bring terrorism and insurgency to an end in the North-east.

He lauded the troops’ high level of alertness and fighting spirit, urging them to sustain the momentum and ensure that the remnants of terrorists hibernating in the area are completely cleared.
Source – This Day