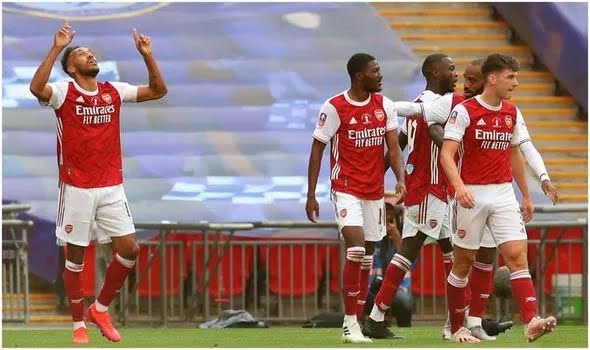 What a job Mikel Arteta has done since replacing Unai Emery. I must admit when that semi-final draw was made I thought Arsenal were finished. But they’ve deserved this. It’s their 14th FA Cup title and fourth in just seven years. Astonishing really.

102: Pedro stretchered off on what’s surely his final Chelsea appearance. Tough on the winger. Sead Kolasinac replaces Kieran Tierney for the final few seconds. Quite literally.

100: Glum and worried looking faces on the Chelsea bench and on the field. Incidentally, IF Arsenal complete the win – Tottenham have to go into the second qualifying round to make it through to Europa League

98: This Pedro injury is more serious that first thought. It looked innocuous enough but the Spaniard is still on the deck and the stretcher is brought on. Chelsea don’t have any substitutes remaining and will end the game with nine players on the pitch.

96: Hmmm. Nicolas Pepe looks to knock Pedro to the floor just outside the penalty area but referee Anthony Taylor ignores it. Not sure why. Anyway, Pedro managed to recycle the ball but over-runs it and hurts his shoulder. He’s now receiving treatment as the seconds tick away.

93: Wasteful. Pedro darts into the penalty area on the left but his looping cross is too close to Emiliano Martinez, who gathers once again. The Gunners are looking a bit panicked here with four minutes remaining.

91:… the ball is whipped in and Emiliano Martinez takes charge. Just what’s needed in the business end of a final. He’s hurt himself in the process and is receiving some treatment.

90: We have SEVEN minutes of added time folks. Seven minutes for Chelsea too find an equaliser… Marcos Alonso wins a corner…

89: Just not seeing anything remotely approaching an equaliser for Chelsea. There’s just no zing to they way they are playing. Ross Barkley booked for a late lunge on Nicolas Pepe. They just need to get the ball forward.

87: David Luiz goes down clutching his calf. The Brazilian doesn’t look like he’ll be able to continue as Sokratis Papastathopoulos is stripped and readied. He’s on.

85: Arsenal are less than 10 minutes away from the FA Cup, and a place in the Europa League next season. Playing quite well too.

80: Ey up! Chelsea are screaming for a penalty when Emiliano Martinez appears to handle the ball outside his penalty area. It goes to VAR… who say NO. The ball is apparently on the line when he touched it.

77: Well… Arsenal will never have a better opportunity to win the FA Cup. One goal ahead, one man up and just over ten minutes left on the clock.

Disbelief on the Chelsea bench at the second yellow for Mateo Kovacic. For those asking, it wasn’t checked by VAR because they only check red card decisions.

75: Tempers flaring now! Mikel Arteta becomes the first manager to be booked in an FA Cup final. He was confronting Antonio Rudiger, who also got cautioned.

73: SENT OFF! Mateo Kovacic has been given his marching orders. Why? Well he’s got a second booking for… nothing really. The Chelsea star and Granit Xhaka basically touched boots when challenging for a 50/50. Anthony Taylor takes his time before giving him his marching orders. Not even sure it was a foul in all honesty.

70: Drinks break. Excluding home games, Pierre-Emerick Aubameyang is only the fifth player to score 2+ goals in a match at Wembley Stadium in club football more than once, after Ian Wright, Bryan Robson, Ian Rush and Eric Cantona. Good company like.

65: We have 25 minutes remaining and, as things stand, we’re going to extra time and potentially penalties. Plenty of time for things to change.

63: The pace of the game has certainly slowed down compared with the first half. Pedro injects some life into things but Reece James spanks his lay-off high into the stands.

60: Chances! At both ends of the field… Mason Mount narrowly fails to connect with a beautiful diagonal pass from Jorginho. A few moments later Alexandre Lacazette slides the ball to ball to an overlapping Pierre-Emerick Aubameyang after great work from Nicolas Pepe. He looks to pull the trigger but Andreas Christensen makes the block.

58: Chelsea have grown wise to Arsenal’s go-too tactic of pumping it long down the channel for Pierre-Emerick Aubameyang to chase. Chances drying up for Mikel Arteta’s side as the Blues start to regain some control.

55: Am I right in saying that Frank Lampard only has one more chance to make a substitute in normal time. So it’s either three at once, or he won’t be able to use five subs.

54: Steady on, Pedro! The Spaniard didn’t have any time to warm up and he’s just gone on a blistering run down the left channel. No end product but promising signs from the substitute.

51: Christian Pulisic is helped off the field with a medical person on either arm. A really sad sight for Chelsea and the neutral. No Willian to replace him – so there’s an unlikely appearance for Pedro! The Spaniard is joining Roma for next season and this will surely be his final game for the club.

48: No change in tactics from either side. Everyone present and correct in the 3-4-3 formation. Christian Pulisic embarks on a mesmerising run, gliding past Rob Holding and firing narrowly wide.

But… he’s injured himself in the process. The US international has done his hamstring. In fact, he screamed in anguish before pulling the trigger. The second Chelsea player of the afternoon to succumb to a hamstring injury

HT: Well… it’s been a half of two halves. Chelsea started the brighter and got their reward through US international Christian Pulisic. Arsenal then came back with a bang and have dominated since the drinks break. Mikel Arteta’s side are in the ascendancy folks.

45: Danger! Arsenal playing with real confidence now. They have a free-kick in a really dangerous position after Andreas Christensen’s clumsy swipe on Nicolas Pepe. This is RIGHT on the edge of the box.

Now who’s going to take this… it’s Alexandre Lacazette. He hits it with venom but the ball slides wide. Mason Mount booked.

44: Arsenal win three corners on the trot. Chelsea don’t deal with them particularly well but well enough to hack the ball clear.

43: Arsenal in control now. Chelsea finding it difficult to keep up their level of intensity with the press. Nicolas Pepe drifts a cross to the back post. Willy Caballero flaps at it and just about gets a fingertip to turn it behind.

Corner to the Gunners. 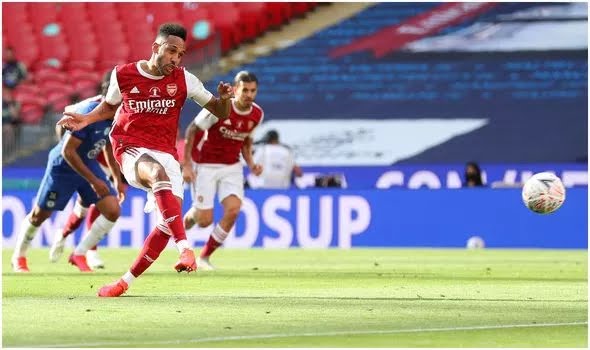 40: Can’t take your eyes off this game for a second. Nicolas Pepe cuts inside from the right but can’t quite squeeze a shot off in time or find the overlap of Hector Bellerin.

37: So that change has seen Frank Lampard reshuffle his pack. Kurt Zouma now playing on the right of the three with Andreas Christensen in the middle. The Frenchman will be heavily involved over there with Kieran Tierney constantly pinging balls for Pierre-Emerick Aubameyang down that channel.

Mason Mount carries the ball into the box, cuts it back for a waiting Jorginho who can’t quite keep his effort under the bar.

35: A rough few minutes for Cesar Azpilicueta. Gives away the penalty then does his hamstring.

34: Injury! Bad news for Chelsea. Captain Cesar Azpilicueta falls in a heap clutching his hamstring. He’s in a lot of pain as the medical staff rush onto the field. The defender is in tears as he limps off the field. Andreas Christensen replaces him.

32: Pierre-Emerick Aubameyang is the oldest player to score for Arsenal in an FA Cup final since 1932, when Bob John netted for the Gunners against Newcastle (33y 80d).

30: Olivier Giroud screams and falls to the deck after a collision with David Luiz. Referee Anthony Taylor asks VAR to take a look but there’s nothing sinister. The Frenchman should be fine to continue.

27: GOAL! No mistake. Pierre-Emerick Aubameyang sends Willy Caballero the wrong way and we are all square at Wembley. Emphatic finish.

26: PENALTY TO ARSENAL! Stonewall at first glance. Cesar Azpilicueta misjudges the flight of a long ball forward and wrestles Pierre-Emerick Aubameyang to the floor. VAR have a quick check… it’s given.

25: Disallowed! Nicolas Pepe scores with a cracking first-time finish from the edge of the penalty area but the flag was up for offside. Correct call.

23: Mikel Arteta was very animated during the drinks break. Not a happy manager as he rants and raves at Kieran Tierney. I notice neither manager wearing a suit today…

22: Wolves supporters will be hoping it ends like this. Remember, if Chelsea win then Wolves get a Europa League place. Drinks break. 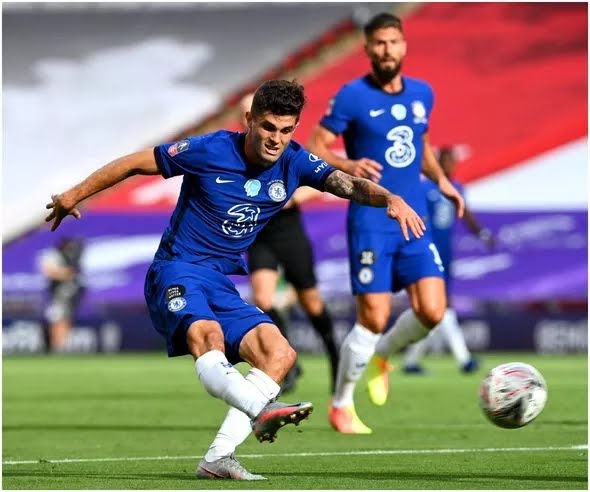 21: Chelsea pressing high. It nearly pays dividends with Nicolas Pepe forced into a mistake, which he just about cleans up. Pressing high also means playing with a high line – and that is giving Arsenal’s quick attack some joy.

18: Risky from Mateo Kovacic, who gifts Arsenal another free-kick within shooting range. No second booking but he needs to be careful.

David Luiz, Nicolas Pepe and Dani Ceballos are all standing over the ball. Luiz is the first to walk away leaving it to Ceballos to hammer it over the crossbar. “It’s in” says Danny Murphy, as the ball clearly is about to sail over the bar.

15: Booked! Mateo Kovacic wins the first yellow card of FA Cup final day. Congratulations to the midfielder, who is cautioned for sliding through Granit Xhaka.

13: Arsenal now attack and win a corner. The commentator talks up how terrible Chelsea have been at defending set-pieces… and Nicolas Pepe fires the ball straight out of play.

10: Saved! Great feet again by Christian Pulisic. Arsenal simply can’t deal with him when he drifts in from the channel. He tip-toes past Dani Ceballos before testing Emiliano Martinez with a powerful effort.

7: Nicolas Pepe looks to restore parity straight from kick-off but his long-ranger doesn’t threaten Willy Caballero. Christian Pulisic is the first American player to score in an FA Cup final, while it was Chelsea’s quickest goal in the final of the competition since Roberto Di Matteo in 1997 (first minute v Middlesbrough).

5: GOAL! Did I really say this would be a low scoring affair? Foolish.

We have lift-off in the FA Cup final and it’s Captain America Christian Pulisic with the breakthrough. Olivier Giroud cleverly flicks Mason Mount’s cross into the path of Pulisic, who dinks the ball past Emiliano Martinez. The Gunners were asleep. 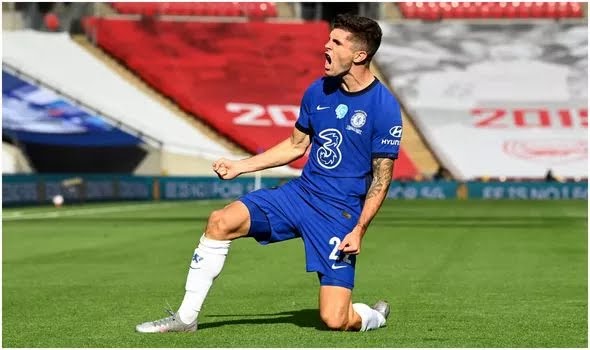 4: Chances! Well… that should really have been 1-0 to Arsenal. Ainsley Maitland-Niles does well to wriggle his way past Cesar Azpilicueta down by the corner flag. His cross is perfect for the arriving Pierre-Emerick Aubameyang, who glances wide.

Chelsea break upfield and Mason Mount forces a fine, full-stretch save from Emiliano Martinez. Olivier Giroud is furious because he was wide open.

3: Should be interesting to see who takes charge of this one. Both playing a 3-4-3 and both prefer playing on the break. Everyone’s saying they expect goals – but I’m predicting a low-scoring affair. Quite a cagey opening with most of the play rattling around the midfield third.

1: PEEP! We’re underway in the FA Cup final, folks! An almost deserted Wembley heard a terrific a rendition of the traditional FA Cup Final hymn “Abide With Me” by Emeli Sandé. She sang it from the roof of the stadium! Good view for the game actually… 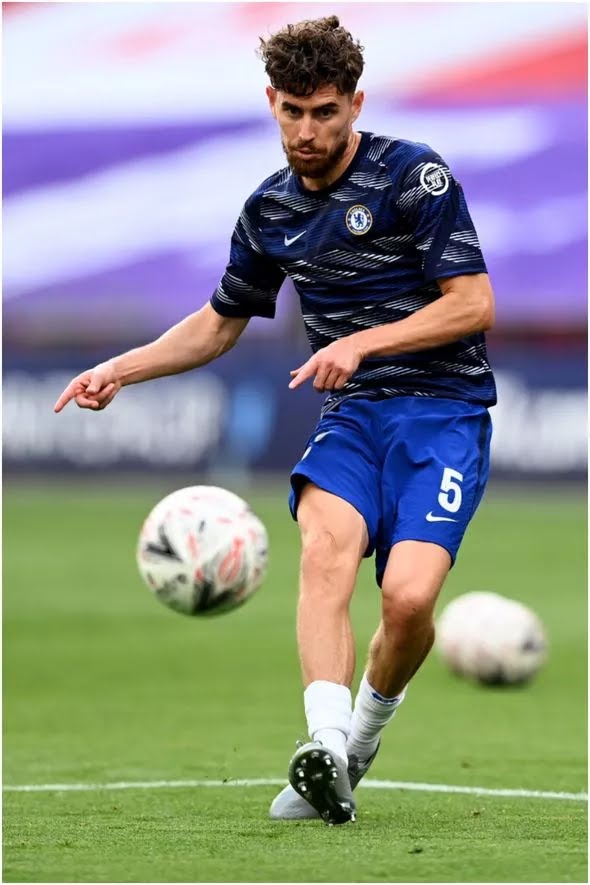 Solskjaer: Pogba and Martial have made ‘huge strides’

Time Has Now Come To Move On:’ Willian Exits Chelsea

Bola Tinubu Accused Of Pocketing The Destinies Of 20 Million Lagosians,...

BIG BROTHER REVEALED: Meet the man behind the voice you hear...