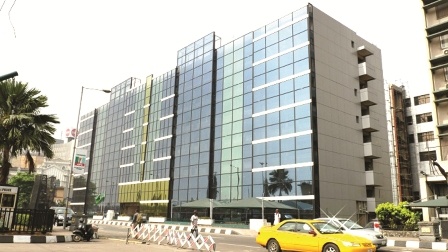 The Headquarters of the Nigerian Ports Authority (NPA), Marina Street, Lagos has been set on fire by an angry mob.

Details of how it happened are still sketchy but sources said the office was set ablaze by urchins as a reprisal on the Federal Government of Nigeria for deploying soldiers on Tuesday night to attack protesters at Lekki Toll Gate.

A source said in-house fire fighters from NPA are currently battling to put out the fire that is raging.

Attempt to reach NPA Head of Corporate communications, Jatto Adams, was not successful as all calls were not answered and text messages not responded to.

OBSERVERS TIMES earlier reported that the house of Lagos State Governor,
Babajide Sanwo-Olu’s mother at Surulere has been set ablaze by unidentified persons.

Also, Bus Rapid Transit (BRT) are being attacked and set ablaze at Oyingbo area of Lagos, according to sources.

Three traders, Ikechukwu Chukwu, Obieze Sylvanus and Chidiebere Obi, have been sentenced to death by hanging by an Ondo State High Court. They were arraigned...
Read more
Crime

A serving Deputy Comptroller of Nigerian Correctional Service centre, Abubakar Mohammed Sani, has been arraigned in court for alleged employment scam. He was arraigned on...
Read more
- Advertisment -