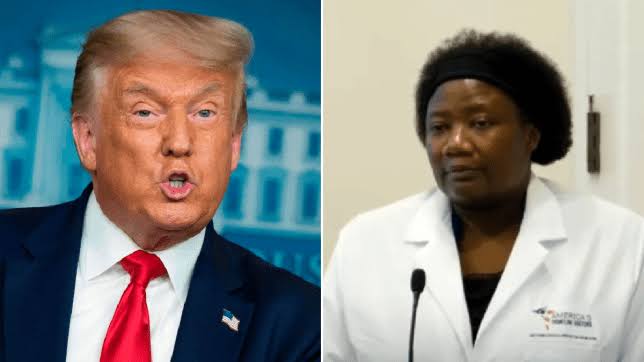 United States President, Donald Trump, has hailed a Nigerian-born doctor in America, Stella Immanuel, for her stance on COVID-19 treatment.

Trump’s commendation was the sequel to her insistence that coronavirus has a cure.

At a news conference in Washington D.C., Immanuel insisted that three drugs were effective against the virus.

The physician listed them as, Hydroxychloroquine, Zinc, and Zithromax.

Trump had shared a footage of Immanuel addressing the media.

But the video, already viewed by millions worldwide via different platforms, was taken down by Twitter.

The deletion sparked a fresh debate about the purported conspiracy of the pandemic and if COVID-19 truly has a cure.

Trump’s critics have launched attacks on Immanuel, accusing her of misinformation.

But the American leader’s supporters insist that we should not discard her comments, wondering why opponents were being pessimistic.

At a White House briefing on Tuesday, Trump answered a question about Immanuel and her claim.

“She was on-air along with many other doctors.

They were big fans of hydroxychloroquine”, the president said.

“I thought she was very impressive in the sense that from where she came,

I don’t know which country she comes from, but she said that

she’s had tremendous success with hundreds of different patients.”

“I thought her voice was an important voice but I know nothing about her.”

He then walked out of left the room.

During her speech, Immanuel asserted that she successfully treated 350 patients with Hydroxychloroquine, Zinc and Zithromax.

Trump has been a vigorous advocate of the mixture, insisting it solved coronavirus.

Furthermore, Medical experts disagree and opine that only a vaccine could guarantee a total cure.

Watch the video below;

A group of Saudi dissidents exiled in countries including the United Kingdom and United States have announced the launch of an opposition party, the...
Read more
World

Some lawmakers in the United Kingdom parliament have reported President Muhammadu Buhari to the Secretary-General of Commonwealth over the unabating spate of killings in...
Read more
- Advertisment -

Another Sad and Painful Loss, Prince Babatunde Irukera commiserate with the Executive Governor of Kogi State, His Excellency Yahaya Bello and the good people...

THE UNEDITED MESSAGE: This morning, we the people of Kogi experienced the gruesome and shocking loss when a fuel tanker crashed, resulted in a fire...
Read more

The Legal Practitioners’ Privileges Committee of the Supreme Court Of Nigeria has nominated 116 lawyers for the award of Senior Advocates of Nigeria (SAN)...
Read more
Load more

Another Sad and Painful Loss, Prince Babatunde Irukera commiserate with the...