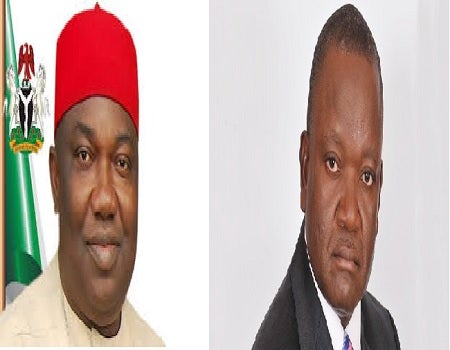 The Benue State Government and its Enugu State counterpart, on Tuesday, met at the border local government, Ogbadibo to close down the border between the two states indefinitely as a measure to prevent the spread of coronavirus pandemic.

Benue State Governor, Samuel Ortom who spoke during the official closure of the borders explained that closure of the border to restrict vehicular movements and influx of people from and to the two states within the period of a global pandemic would halt the spread of the dreaded disease.

Ortom who personally visited the border area where he met with the Enugu State chairman of Security Joint Taskforce, Commissioner of Police, Ahmad Abdulraman, said that compliance with interstate lockdown is the surest way to halt the problem of community spread of the coronavirus.

The governor called on the task force from both states to show enough commitment by restraining people from travelling and gathering unjustly and to use their discretion to allow those on essential duties to pass and render their services.

He noted that both Benue State Action Committee on COVID-19 and the Enugu State Quarantine unit must work closely and collectively to ensure the border is completely shut against COVID-19.

According to him, “We have come to show the seriousness of our state towards curtailing the spread of COVID-19 by having our borders closed. This disease is real and the only way we can fight it or prevent it from spreading it across the states is to remain at our homes and that is the only preventive measures for now.

“We have also come here to observed the level of enforcement between the states on the Federal Government protocol against COVID-19 and I believe Enugu State is maintaining the restriction orders. We can not restrict total movement and that was why the restriction was not extended to those on essential duties.

“By the grace of God, the scientists will find solution to the pandemic. I, therefore, urged the task force committee from both states to also enforce government directives with humans face due to the hardship being experienced by people as a result of the lockdown,” Ortom stressed.

CP Abdurrahman who is also the chairman Enugu State Security Joint Taskforce on COVID-19 noted that before now, restriction of people in and around Enugu/Benue borders have been problematic for security personnel, saying that with the official shutting down of the borders, they would now fully enforce the ban on inter-states travels between the two states.

“On our part as security agents, we are not resting on our oars to ensure that movement of people within and outside the state is restricted in line with government directives to prevent the spread of coronavirus disease,” Abdurrahman stated.

As for Kogi state government, COVID19 remains a hoax with actors acting on a conspiracy theory, Yahaya Bello and his men are still studying the virus either it’s exist or not, we are waiting