A former senator from Kaduna State, Shehu Sani has questioned the rational behind government’s selectivity on those arrested and prosecuted for violating covid-19 directives put in place.

Sen Sani on Sunday took to his twitter page to ask why government would arrest, try and punish a popular musician, Naira Marley for staging a convert in Abuja in violation of the covid-19 directives set by government, but would not say anything concerning mass gatherings of politicians and residents of Edo State in the ongoing campaigns for the governorship election in that state.

It would be recalled that the Musician had recently been tried before a mobile court, and fined N200,000 for his actions.

However, pictures and videos from campaign grounds in Edo State continued to show mass gatherings of politicians, among them state governors, and other residents in clear violation of the social distancing rule, as directed by government as part of moves to curtail the spread of covid-19 in Nigeria.

In his reaction, Sen Sani asked: “Where is Justice if Naira Marley can be arrested, tried and fined for violating the #COVIDー19 protocols while the Edo Political Campaigns rallies goes unchallenged by the law, by the @NCDCgov and by the PTF?”. 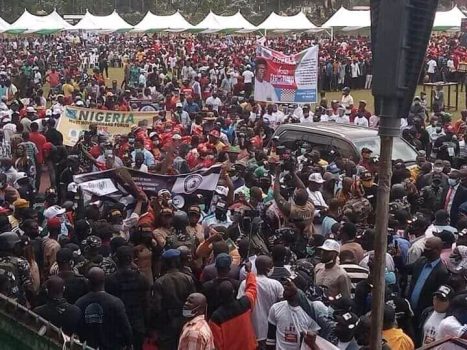