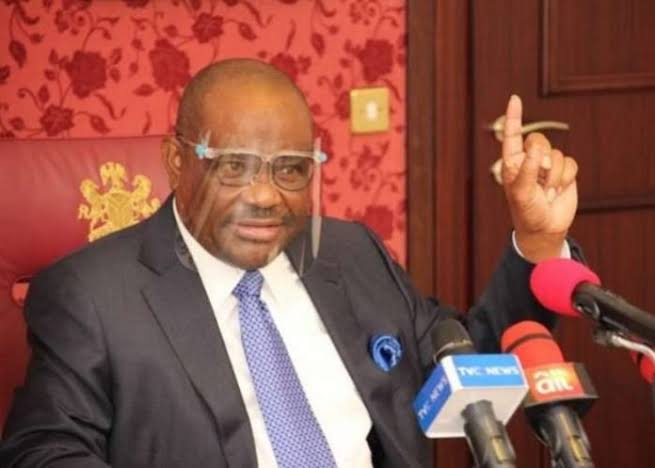 Governor Nyesom Wike of Rivers State has described the governorship candidate of the All Progressives Congress in Edo State, Pastor Osagie Ize-Iyamu, as “a bad product that won’t sell”.

The Edo governorship election is slated for September 19, 2020.

Wike, who is the Chairman, Peoples Democratic Party Edo State Governorship Campaign Council, said this during an interview with a national television network in the state.

The governor said he drew his conclusion from analysis of facts deducted from the previous governorship election in the state.

According to a statement on Friday, signed by the Rivers State Commissioner for Information and Communications, Paulinus Nsirim, the erstwhile National Chairman of the All Progressives Congress, Adams Oshiomhole, had explicitly exposed the true identity of the Edo APC governorship candidate, Ize-Iyamu.

Nsirim, quoting Wike, added that it was an insult to the Edo people for Oshiomwhole to to reverse his earlier position and ask Edo electorates to accept such a man.

He said, “Adams Oshiomhole told Edo people that Ize-Iyamu was rusticated from school that he poured acid on a fellow student that destroyed his manhood. That he is an armed robber that cannot be trusted with money, such a character cannot be accepted by Edo people as Governor during the election.

“I respect the Benin tradition and I know that Edo people are educated to know that Oshiomhole cannot play on their intelligence. If he is now retracting what he said of Ize Iyamu, who is sure that he’s saying the correct thing now.

Adams Oshiomhole’s sudden u-turn is a great insult on Edo people. This is an opportunity for Edo people both at home and in the diaspora to use their votes to tell Oshiomole that they cannot take his lies anymore.”

Wike said the APC candidate had nothing to offer the Edo people except promises, alleging the APC was planning to rig their way during the elections.
Sadly, Pastor Ize-Iyamu and his party have nothing to offer Edo people, except the empty promises, which even Oshiomhole has dismissed by telling the world that Ize-Iyamu lies too much.

The only hope the APC is relying on now, according to Governor Wike, “is to rig the Edo State Governorship elections, because it knows that the people of the State will not buy the bad product Oshiomhole is presenting as the party’s candidate in the September 19 Governorship election.”

Return to APC before is too late , group tells Atiku, Saraki, Dino, Tambuwal