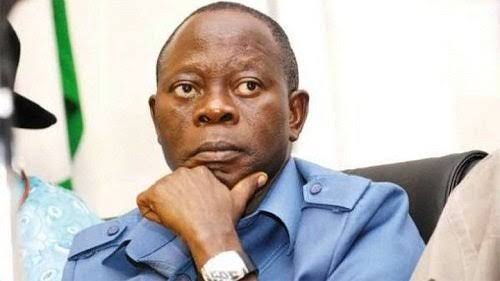 Efforts by the former nation­al chairman of the All Pro­gressives Congress (APC) Adams Oshiomhole, to ap­pease the Onojie of Uromi, HRH Anselm Okojie, Aide­nojie II, and woo Esan voters to support Osagie Ize-Iyamu, candidate of the APC in the September 19, 2020 election, have been rebuffed.

However, it was learnt that Oshiomhole has been asked by the royal father to come back after the gu­bernatorial election if he is committed to genuine recon­ciliation.
Sources familiar with the development said Oshiom­hole’s overtures were in­formed by the growing num­ber of Esan people opposed to Ize-Iyamu’s candidature, more so, with Oshiomhole leading his campaign train, and eating words he spit four years ago.

Commenting on the planned reconciliation, convener of Esan Agenda, Akhere Obozele, said “Os­hiomhole is insincere and only wants to use the so-called reconciliation to beg for Esan votes.”

He added: “So Oshiom­hole has just realised that what he did to our Onojie four years ago was wrong, with less than two months to the gubernatorial election.

He actually thinks he is smarter than everybody in this state. He has been going about performing kneeling stunts that he is using to de­ceive people.”