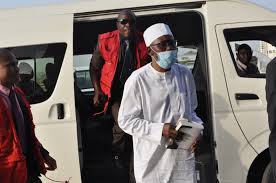 Former Attorney General of the Federation (AGF) and Minister of Justice, Mohammed Adoke, is stranded in the United Arab Emirate (UAE), where he tested positive for the COVID-19, Mr Kanu Agabi, a senior advocate of Nigeria, told the Federal High Court in Abuja.

Agabi, counsel to Adoke, told Justice Inyang Ekwo in the alleged money laundering trial filed against him and a businessman, Aliyu Abubakar, by the Economic and Financial Crimes Commission (EFCC). Adoke was granted the permission to travel abroad for medical check up on December 11, 2020.

The judge, who ordered the release of the ex-AGF’s international passport to him, gave him the permission to travel between December 15 and return on January 10, 2021, a day before the scheduled resumption of trial. However, at the resumed proceeding, Adoke was not in court.

Agabi told Justice Ekwo that his client tested positive to the disease at the point of his return to Nigeria, and was subsequently held back by the UK authorities.

The lawyer further told the court that Adoke later tested negative to the coronavirus after his treatment but was unable to get flight to the country as ordered by the court.

Agabi informed the court that an application dated January 4 and filed same day, seeking for an extension of time to avail the first defendant the opportunity to take care of himself, had already been brought before the court. He then prayed the court to extend the time within which Adoke would be allowed to appear in court for his continuation of trial.

The senior lawyer, however, assured that the former minister would make himself available for his trial in the next adjourned date.

Justice Ekwo adjourned the matter until March 1 to March 4 for trial continuation.

As groups continue to rally support for Kogi state governor, Alhaji Yahaya Bello, to vie for the presidency in 2023, a civil society organisation,...
Read more
News

About N50 billion public funds have been allegedly misappropriated by the Nigeria Bulk Electricity Trading Plc (NBET). This is according to the Senate Committee on...
Read more
- Advertisment -