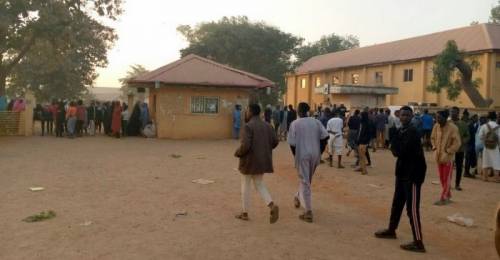 The gunmen also shot Engr. Atiku’s neighbour, Sanusi Hassan who works at registry unit of the institution before they made away with his children.

The Public Relations Officer of the school, Abdallah Shehu who confirmed the incident, said Hassan was shot in the hand and is currently receiving medical attention.

Speaking with our correspondent, Engr. Atiku’s wife, Khadija Suleiman said her husband had returned home after 8 pm and put on the generator.

“He then spent a few minutes speaking on the phone with one of his bosses,” she said.

Khadija explained that soon after the phone call, her husband ate and both of them settled for a relaxing evening on the TV when she heard someone banged on their door.

“At that time, I asked him if he had locked the door with the key when he came in and he said no. So I told him to check the door perhaps one of our neighbours wanted something; that was a few minutes to 9 pm.”

She said unknown to both of them, the gunmen had already invaded their compound, leveraging on the sound of the generator.

“I heard my husband scream and he came back into the house saying Innalillahi Wa Inna Ilaihi Rajiun (from Allah we came and to Him we shall return) while two men with guns trailed him.

“They came to the sitting room and told us to lie on the floor. They took our phones but left the laptop. One of them asked for money and I told them we don’t have money and so he slapped me. But the other man told him to leave me alone. They now asked my husband to wear his shoes and they left with him,” she said.

Khadija explained that a similar incident had occurred within the quarters about two years ago when a woman was abducted.

She said she never thought they will be victims of kidnapping also. Daily Trust reports that the school is exposed to security challenges because it lacked a perimeter fence.

The Rector, Engr. Muhammad Kabir Abdullahi told our correspondent that a security meeting had taken place to find a lasting solution to their predicament including how to fence the school.

“We have had security meetings and we have now stationed mobile policemen to guard hostels and staff quarters and more are being deployed. We have met with the students to calm them and assure them that their security is a top priority but we will not be closing the school,” he said.

Kaduna police spokesman, Jalige said they were on top of the situation as the entire area had been combed while efforts were ongoing to rescue the victims.

BREAKING: Kidnapper who pretends as lunatic apprehended in Ekiti

Gunmen suspected to be bandits have abducted 18 police officers around Farin-Ruwa junction along the Birnin Gwari- Funtua road in Kaduna State. According to SaharaReporters,...
Read more
- Advertisment -

Gen.Buba Marwa: NDLEA Will Be Reposition,Expanded says over 15 Million Nigerians are on hard drugs.

President Muhammadu Buhari has formally conveyed to the Hon. Minister of State, Labour and Employment, Festus Keyamo, SAN, his approval of the nomination of...
Read more

The Senate Public Account Committee has described as unacceptable the payment of N98.4m by the Petroleum Resources Ministry for the printing of leaflets. The flyers,...
Read more
Load more

Gen.Buba Marwa: NDLEA Will Be Reposition,Expanded says over 15 Million Nigerians...