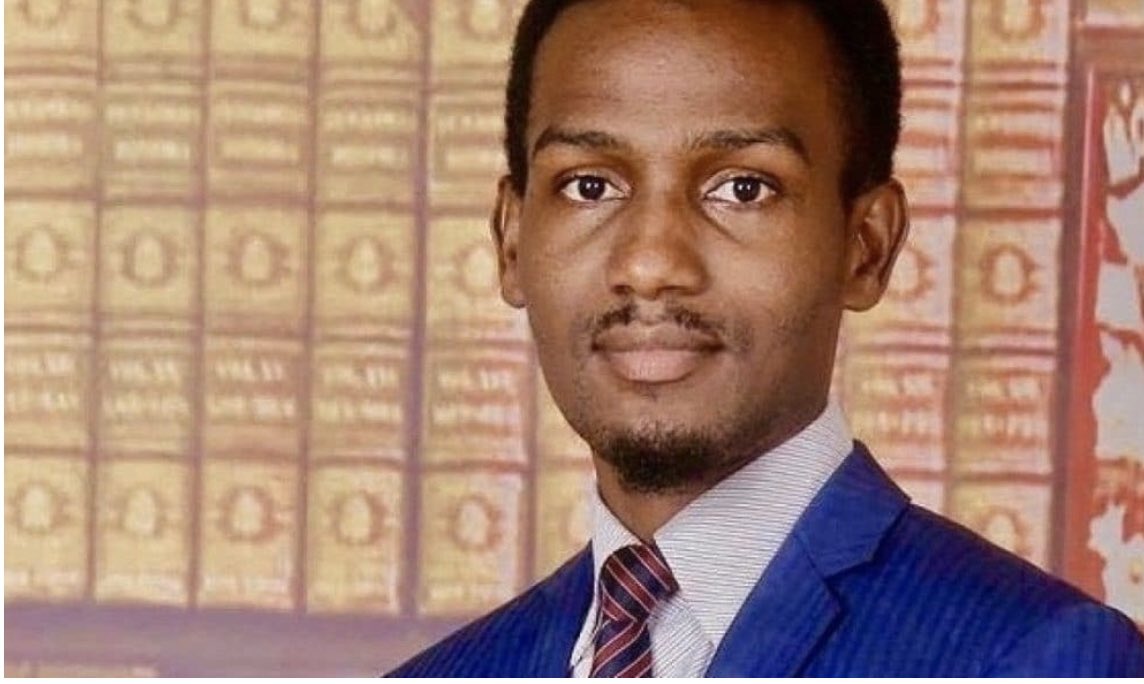 The Department of State Services (DSS) says Abubakar Idris, a social media influencer better known as Dadiyata, is not in its custody.

Dadiyata, a critic of the government, went missing in August. There are reports that he was abducted by armed men while driving into his residence in Kaduna state.

Many had accused the secret police of arresting him but in a statement on Tuesday, Peter Afunanya, DSS spokesman, said the agency knows nothing about Dadiyiata’s movement.

He also distanced the DSS from the trial of Abba Jalingo, a journalist in Cross River state.

“The attention of the Department of State Services (DSS) has been drawn to serial allegations by sections of the media that the Service is illegally detaining some Nigerians. Of specific mention were Abubakar IDRIS (aka Dadiyata) and Agba JALINGO said to have been arrested in Kaduna and Cross River States respectively by the Service,” the statement read.

“These allegations, to say the least, are spurious and can only be taken for what they are – deliberate and subversive campaigns of calumny to undermine the Service and cast it in bad light before the public. That IDRIS was taken away from his house by some armed men does not suggest that those men were DSS staff.

“For the sake of emphasis, the Service has no reasons to deny its arrest and detention of suspects if actually it carried out operations during which such persons were arrested.

The spokesman said the service is a professional body and its operations are guided by strict rules and procedures.

“It is not out of place for security and law enforcement agencies to arrest and detain law breakers or those suspected to be. The arrest and detention of suspects are procedural and undergo continuous review. In certain conditions, some are routinely questioned and released while others are granted administrative bail,” he said.

“Some who are still under investigation or already undergoing prosecution are held on the basis of court orders. Suspect handling is a critical aspect of the Service’s responsibility and this is taken seriously without any form of compromise.

“It diligently carries out this function in strict compliance with the criminal justice administration system and intelligence governance procedures absolutely necessary for consolidating democratic ideals in Nigeria. It is, however, important to state that suspects in the Service’s detention are not ‘routinely tortured’.

“It wishes to categorically state that it will, henceforth, not condone acts of misrepresentation and falsehood against it and in this regard, will explore legal options to seek redress.”

You Don’t Even Know The Venue Of Your Party Congress, PDP youths taunt Akpabio over Akwa Ibom APC congress. 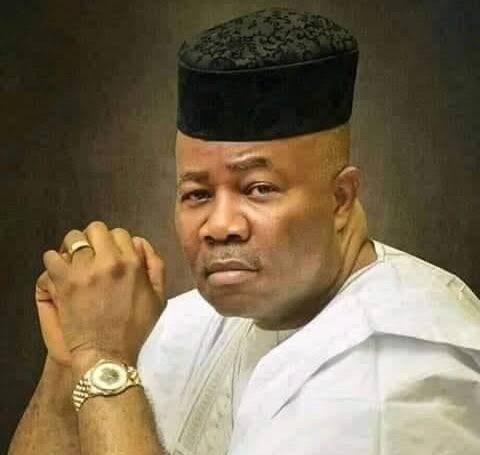 A group of Peoples Democratic Party (PDP), youths, PDP Youths Congress (PDPYC) has described the treatment meted out to the Minister of Niger Delta Affairs, Chief Godswill Akpabio, by the All Progressives Congress (APC) in Akwa Ibom State, as the beginning of his reward for political harlotry and betrayer of the PDP, a party that gave him everything politically.

On Saturday, angry protesters drawn from the faction loyal to Senator Akpabio had protested at the All Progressives Congress (APC)secretariat in Uyo, the Akwa Ibom State capital, seeking the cancellation of the ward congress exercise. They accused the National Caretaker Secretary, Senator John Udoedehe, of “fraudulently manipulating the lists to include only his loyalists as candidates for the wards and chapter congresses.”

Reacting, the PDPYC said ‘it was shameful that Senator Akpabio, who, while in PDP, was a highly respected politician but today, is crying over APC ward congress like a rat being pursued by a hungry cat. Shameful!’

In a statement issued in Abuja on Monday by the PDPYC Director of Communications and Mobilisation, Akpan Ibor, the youths said: ‘More humiliations still await Akpabio in APC, unless he retraced his steps to the PDP and apologise to the party members and supporters.

‘What happened to Senator Godswill Akpabio is the beginning of the humiliation he will suffer in the APC. More will still come because, by 2023, he won’t be able to field himself and any of his loyalists as candidates in APC.

‘Imagine Akpabio, having to organise protest and set bonfire at APC secretariat in Uyo over ward congress. Isn’t it shameful?

‘That is what you get when you engage yourself in political harlotry, moving from your own political mansion to become a tenant in other people’s political boys quarter.

‘If he had not decamped to APC out of political greed, Akpabio would still have remained in the Senate as the Minority Leader, a position that is more honourable than that of Minister of Niger Delta Affairs that he is holding now.

‘As for us in the PDPYC, we don’t pity Akpabio and his likes. We only hope that others will learn from the political misfortune that is befalling him in APC.’

We resign because of incompetence of the PDP National Chairman, Prince Uche Secondus-Ex-PDP NEC officials. Seven former deputy national officers of the Peoples Democratic Party (PDP), have explained why they resigned their positions as members of the National Executive Council.

The officers attributed their resignation to the incompetence of the PDP National Chairman, Prince Uche Secondus.

One of the officers cited bad treatment by the Secondus led National Working Committee (NWC) leadership of the deputies, since they were elected in 2017.

“Since our election in 2017, we (deputy national officers) have only met with Secondus thrice. It is not as if he called us; on those three occasions, we sought audience with him.

“To him, we are just a necessary evil to be tolerated but never to be catered for. We all have our constituencies and our followers.

It appears they see us as nothing but appendages forced on them by the party’s constitution,” he said.

Odeyemi, who was in London, United Kingdom, while declining comment on the development, aligned himself with the decision of his colleagues to resign.

The PDP National Publicity Secretary, Mr Kola Ologbondiyan, confirming the development, said that the NWC had received the resignation letters.

Ologbondiyan said that the party leadership would look into the matter and adopt the internal mechanism to resolve it.

The NWC of our great party at its meeting today received the notice of the resignation from deputies who are elected members of the National Executive Committee.

“The meeting of the NWC and the deputies immediately took place to dialogue on the issues that were raised.

“The party will look into the grievances raised by members of NEC as well as members of the National Working Committee.

“The internal conflict resolution mechanism of our party has also been immediately activated to put these issues behind us.

We call on all the leaders, stakeholders and members of our great party to remain calm as we collectively resolve these issues,” Ologbondiyan said.

He slammed Secondus for incompetence in managing the affairs of the party, saying he lacked managerial capacity to manage PDP.

He said that Secondus had made sure that many departments of the party did not function as effectively as it ought to function.

The Chairman has nothing to offer to the party only to come here and deceive us.

“There is a sharp division in our NWC right now, not only me, many more NWC members are more aggrieved than myself.

“Today I have asked him in our NWC meeting to resign his position as the chairman of this party because he cannot lead this party to victory,” Ude-Okoye said.

He called on PDP leaders, the governors, the founding fathers, youths and women to rise up to rescue the party from Secondus incompetent leadership.

“Secondus is not willing to take us to anywhere. He is just there to make sure that he enriches himself.

“I am here to make it very clear to all Nigerians that if Secondus does not resign from the party, I am going to leave the party for him to eat the party and own the party.

“The governors, if they don’t wade into this matter right now, I assure Nigerians that within the next three, four days, my letter will be public,” Ude-Okoye said.

He added that more officers of the NWC would still resign because of Secondus. 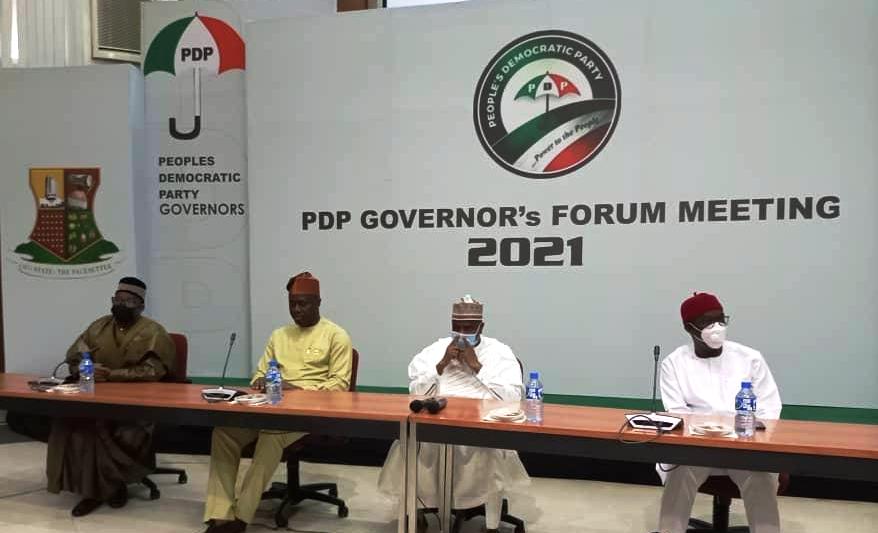 The PDP Governors’ Forum has received with regrets and sadness the recent rumblings in the PDP.

The Governors hereby call on all members of the party and indeed all stakeholders to remain calm in the face of the developments.

We plead with all aggrieved persons and those with the interest of the PDP at heart to keep their gun powder dry, as efforts are being made in consultation with members of the PDP Board of Trustees and other stakeholders to resolve all contending issues.

To this end, the PDP GOVERNORS’ FORUM has scheduled an emergency meeting to discuss the affairs of the Party and the way forward.

The PDP as the only remaining hope of the nation for good governance must show an example to Nigerians and also take advantage of the current disarray in the APC and its rudderless government.