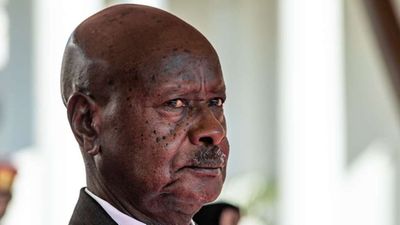 President Yoweri Museveni has warned his opponents against taking to the streets.

“If you use violence to protest against an election result, that is treason,” Museveni said in a national address Tuesday.

Ugandans began voting in a tense election Thursday under heavy security and an internet blackout as veteran leader Yoweri Museveni pursues a sixth term against a former pop star half his age.

The internet went down on the eve of the vote, with some parts of the country reporting complete disruptions or significant slowdowns, after one of the most violent campaigns in years.
Museveni’s opponent at the poll, Wine, whose real name is Robert Kyagulanyi, has accused the president of presiding over corruption and failing to deliver jobs.

The population has a median age of just less than 16, and many Ugandans have never known anyone but Museveni in charge.

In Kamwokya Cate Nabbale, 20, a primary school teacher, voted for the first time.

“I am so excited … I want to see Uganda growing, things changing,” she told AFP.

Wine has vowed non-violent street protests should Ugandans feel the election was stolen.

The opposition leader has urged them to turn out in large numbers and vote, saying they should not fear intimidation by the authorities.

Like Loading...
Facebook
Twitter
WhatsApp
Previous article2023 Presidency: We Are Ready to Run An Errand For Your Ambition, Kogi Speaker Tells Bello, Lined Up Assembly Members Before Him.
Next articleWHEN HOMECOMING IS DANGEROUS _Reviewing the Assassination of Ogacheko Atanu and a Warning to Nigerians in Diaspora on the State of Insecurity in Nigeria_

BREAKING: Uganda President rigged himself back to to office for 6th term in Office

The President of Ugandan, Yoweri Museveni has been declared winner for a sixth term in office with 58.6 percent of the vote, in an...
Read more
Africa

Unbelievable! Man Storms Funeral And Tries To Have S*x With Dead Woman’s Corpse In Front Of Her Family

In what will come across as a really unbelievable development, a woman’s funeral has recently turned into a bizarre sex show. The funeral turned bizarre...
Read more
- Advertisment -