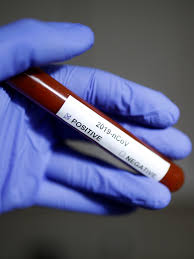 The travail of frontline Coronavirus pandemic workers in Nigeria is far from over as more doctors, other health workers and police officers have reportedly contracted the virus.

As at last week, the Federal Government confirmed that no fewer than 133 doctors as well as some security personnel have either been infected or had died from COVID-19 complications.

In Kano, Abubakar Nagoma, chairman of the Association of Resident Doctors of the Aminu Kano Teaching Hospital (AKTH) announced, yesterday, that samples taken from 10 medical doctors working at the hospital returned positive.

He said the doctors were infected in the course of their duties, adding that those affected included resident doctors and consultants.

He said he was aware that eight of the doctors have been moved to the isolation centre where they have commenced treatment while two had remained self-isolated in their homes largely because they had not shown any symptom.

Nagoma said the test results followed a screening of over 100 workers last week.He explained that the doctors were exposed to the virus following the failure of patients to use face masks while visiting the hospital as well as the absence of sufficient PPEs.

He alleged that some patients were not truthful about the information they provide and threatened that doctors may discontinue attending to patients if the management would not provide them with the needed PPEs even as he acknowledged that the hospital management was unhappy that it had not been supplied with sufficient PPE.

It was gathered that the policemen, who have been admitted at the IDH in Akure, contracted the disease from a female colleague who allegedly refused to go for testing despite showing COVID-19 symptoms.

She was, however, exposed by a relative who posted on a WhatsApp platform that her sister had been taking herbs at home to treat herself rather than go to the hospital. She said she cried out so that innocent people around her would not be infected in case she tested positive.

“I’m ready to give all information needed. It’s my blood sister. The family members did not know. Our neighbours too don’t know about her health condition and she is drinking herbs,” she said.

Police spokesman in the state, Mr. Tee-Leo Ikoro, confirmed that there was an officer infected at Yaba Police Division.

Also, Governor Rotimi Akeredolu has confirmed that three workers, including two health officers and one driver have contracted the disease.

He said the workers who are casual staff at the state -owned IDH have been given automatic employment into the state civil service. They are among the 13 cases currently recorded in the state.

A driver with the Nigeria Centre for Disease Control (NCDC) has also tested positive for the virus in Nasarawa State, Governor Abdullahi Sule disclosed during an expanded state security meeting in Lafia, yesterday. He said the driver transported test samples to the NCDC in Abuja and got infected in the process. He said the driver who resided at Ado in Karu Local Government Area of the state, was confirmed positive yesterday morning.

According to the governor, the patient had been moved to an isolation centre at the Federal Medical Centre (FMC), Keffi, for treatment.Sule said all coronavirus patients were receiving treatment at the Dalhatu Araf Specialist Hospital, Lafia, and the FMC.

He said the state had taken delivery of 6,000 personal protective equipment, 50,000 imported face masks and 50,000 face masks made by the National Youth Service Corps.

He urged the people to adhere to directives on COVID-19 prevention in order to stem the tide of the virus.

Meanwhile, Governor Akeredolu has approved new special hazard allowances for health workers as a result of their role in the fight against COVID-19.

“I have also approved that all Health workers in the state be paid 50 percent of their consolidated basic salary as hazard allowance.Furthermore, all healthcare workers working directly in the isolation and treatment centres are to get additional 20 percent of their 50 percent as special risk allowance, they will also get a top-up lump sum from the funds of the PTF.

“I must quickly express our deep solidarity with the brave workers at our Infectious Disease Hospital (IDH) who, in the course of saving other people’s lives, contracted this deadly disease. Both the driver who carries samples to test centres outside the state and the two casual workers in the wards took the highest risk in helping their fellow human being. They are our heroes.

“To live in service of humanity in preserving social existence and continuity, is perhaps the greatest sacrifice for mankind. These three individuals are junior workers in that establishment, yet their contributions are critical and very essential to all our operations to fight COVID–19. They faced the daily risks of worst dimension with candour. At the end, they are infected with the deadly Virus.

“I want their families and loved ones to know that Ondo State government stands firmly with them and will walk with them through these difficult times until they recover and fully get back their daily lives. Their tribulation is our burden and their total recovery will be our joy.

“To further demonstrate our understanding and total commitment to supporting the frontline risk bearers, I have directed immediate absorption into the public service of the infected casual workers at the IDH,” he said.