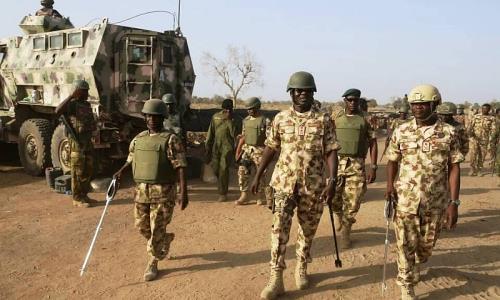 The Nigerian military says it’s winning the war against terrorism as its troops of Operation Lafiya Dole killed at least 343 Boko Haram terrorists, including their key leaders, in several operations in the north-east from March 18 to May 5, a period of less than two months.

The military also said 153 bandits were killed in thenorth-west and north-central parts of the country within the same period.

He, however, regretted that several soldiers were alsokilled while others sustained various degrees of injuries in the course of the operations.

Giving an update on the operational activities of the troops, Enenche explained that some villages that were attacked during the period were rescued by the gallant troops and normalcy returned to the affected areas.

He added the troops destroyed most of Boko Haram’s logistics installations and networks while 16 of their informants and logistics suppliers were arrested.

“At the call of this duty, some of our troops paid the supreme prize and others were wounded in action,” he said.

Enenche further explained that troops of Operation Hadarin Daji conducted various clearance operations during the period under review. He said the combined effort of the land and air components as well as other security operatives of the operation provided security for lives and property.

“Several bandits’ locations and hideouts were cleared with Close Air Support provided for ground troops. In all, a total of 17 kidnapped victims were rescued and united with their families and 146 bandits were neutralised in Katsina and Zamfara States,” Enenche said.

“Within the same period, troops of Operation Hadarin Daji recovered several arms and ammunition among other equipment. Our agile troops also rescued 922 Rustled Cattles and 446 sheep. However, foursoldiers paid the supreme prize,” he said.

Enenche said troops of Operation Whirl Punch,during the period under review, equally clamped down on armed militia and other bandits in Benue and Taraba States.

“Within the period, troops rescued seven kidnapped victims and recovered large caches of ammunition and other items. A total of sevenbandits were killed by troops from contacts made at Toto Nasarawa State and Anku Mbagen in Atera-Jange Torov Council Ward of Ukum Local Government Area of Benue State. None of ourtroops was wounded or killed in action,” he said.

On maritime operations, Enenche further disclosed that troops of operations Awatse and Delta Safe uncovered a total of 61illegal refining sites and a total of 4,464.8 and 1,781,000 litres of crude oil.

He said 15 hostages were rescued, a barge and some weapons were recovered and three pipeline vandals arrested.

“From our operations within the period reviewed, it is obvious that the Armed Forces of Nigeria is winning the war against the enemies of our great country. The High Command of the Nigerian Military wishes to thank the general public for their support and further solicit their cooperation towards providing credible and timely information that will facilitate proactive engagements in our operations,” Enenche said.

After widespread looting of warehouses, the Kaduna State Government has explained why it did not distribute COVID-19 palliatives to the people during the lockdown. On...
Read more
- Advertisment -