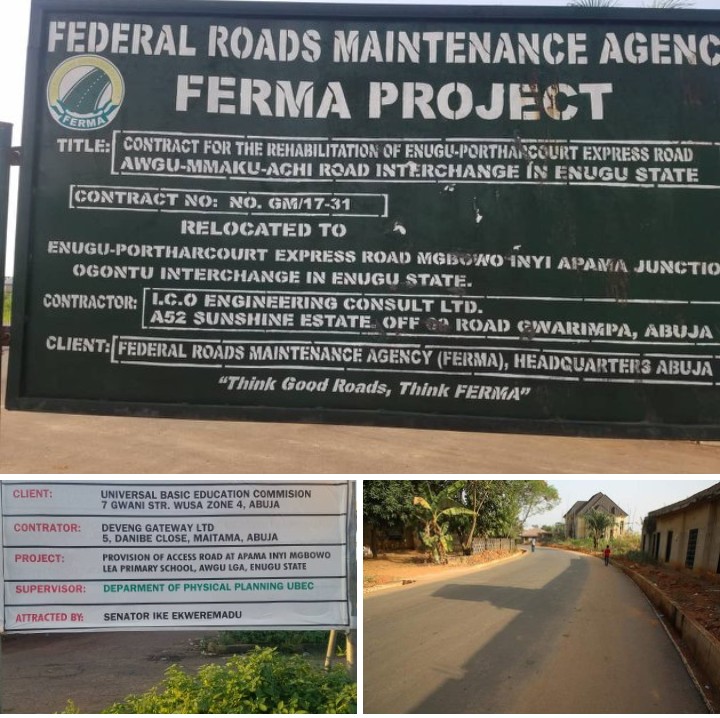 “Leadership is an action not a position”.

“It was my pleasure to commission the Ogontu/Apama/ Inyi Mgbowo road project, which I attracted to make life better for my constituents. I return all the glory to God”. -Sen. Prof Ike Ekweremadu CFR ( 8th January 2019 ).

The above statements was released by Ikeoha Ndi-Igbo through his official facebook page after the commissioning of Ogontu/Apama/Inyi Mgbowo road project which happened to be the first road project attracted and executed in Mgbowo community courtesy of Sen. Prof Ike Ekweremadu.

Permit me to redirect the ignorant and attention seekers who believed that denting or blackmailing the image of someone who God has blessed will make them achieve their petty political aims, may be they have been brainwashed that such visionless political lifestyle pays but not at all, such is no more obtainable but it can only lead the person astray.

I came across a fallacious, mischief and baseless write ups/articles from an uninformed individual against the Ikeoha Ndi-Igbo regarding the Ogontu/ Apama/ Inyi road which was attracted, executed and commissioned by Distinguished Sen. Prof Ike Ekweremadu for the betterment of Ndi Mgbowo community ( my own community ), though” I decided not to give such eye service and fabricated write ups attention but I have no option than to render this unmerited attention to it

First” I wish to remind the writer/publisher of this propaganda that Distinguished Sen. Prof Ike Ekweremadu is a parliamentarian who has the responsibility to make ( enact ) “Law”, personally” I believed that anything from this can be achieve by appealing.

Just like other uncountable project ( either executed or ongoing/construction )attracted by Ikeoha to his constituents, the Ogontu/Apama/Inyi Mgbowo road was commissioned on 5th January 2019 ( I guess ) which the second phase leading to Inyi Mgbowo is on course.

The project was awarded to Deveng Gateway LTD and not Bamboo Construction Company which is under the supervision of department of physical planning (UBEC ).

The uninformed writer also ridicule himself by not knowing or differentiating the 2 project sign post, the black sign post is from FERMA for the rehabilitation of Enugu-Port Harcourt Express Road/Awgu-Mmaku-Achi Road interchange in Enugu State, the sign post only describes their site relocation address and has nothing to with the Ogontu/Apama/Inyi road project while the UBEC sign post represents the Ogontu/Apama/Inyi road project attracted by Ikeoha Ndi-Igbo to the good people of Mgbowo community in Awgu LGA, I believed that the both messages in the sign post will guide us more.

There is never a time this road project was re-attracted, renamed or re-awarded, all this fabricated cheap propaganda is dead on arrival.

I urge the ignorant and uninformed ones who is seeking for cheap recognition to channel their sycophantic accountability campaign to the right place or people.

Ikeoha has done marvelously well for his constituents and we will forever remain grateful and thankful to him.

Permit me also to use this opportunity to thank and appreciate Sen. Prof Ike Ekweremadu for his kindness towards Ndi Mgbowo and Awgu LGA in general.