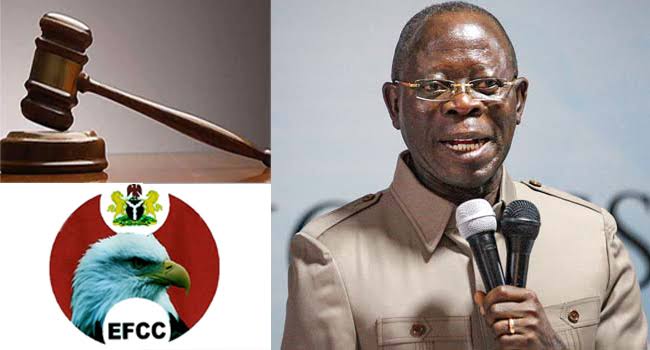 The sacked national chairman of the All Progressives Congress (APC), Comrade Adams Oshiomhole, has summoned his legal team for guidance as the Economic and Financial Crimes Commission (EFCC), under the new leadership of Mohammed Umar, swoops in on high profile politicians, including Oshiomhole, whose files were found in the home of Ibrahim Magu, the suspended EFCC chairman, last week.

The security source who spoke with OBSERVERS TIMES on condition of anonymity said the new EFCC boss, Umar, has commenced preliminary investigation into all the cases contained in the files that were recovered from his predecessor’s house after a search.

Recall that the former EFCC boss was said to have been shielding some persons, especially high profile politicians, from justice, with several tactics designed to delay their trial.

Coincidentally, Oshiomhole‘s arrest is coming at a time his friend and candidate of the All Progressives Congress (APC), Pastor Osagie Ize-Iyamu, is entangled in a N700m money laundering case preferred against him by the Economic and Financial Crimes Commission (EFCC).

The trial has suffered delays due to Ize-Iyamu’s absence in court, even as the presiding judge, Justice Mohammed Garba, had earlier validated the charges against him.

Pastor Osagie Ize-Iyamu is the first defendant in the suit No. FHC/BE21C/ 2016 filed by the EFCC, who accused the defendants of conspiring among themselves to commit the offence in March 2015, alleging that they took possession and control of the funds without any contract award.

At the last court session, the judge rejected the oral request for a prolonged adjournment of the case by the Counsel to Ize-Iyamu, who argued that his client will not disobey the order of the court.

Justice Garba stated that the last time somebody was here, he (the judge) made an order for the accused person to appear in court or face arrest.

Since 2016, Bishop Dr., Osadolor Ochei JP, a human rights activist and anti-crusader based in Benin City, has vigorously pursued the corruption case he initiated via a petition to the EFCC, alleging that Oshiomhole violated relevant sections of the constitution when he acquired a sprawling city of mansions in his home town, Iyamho, worth over N10 billion, while in office, amongst other allegations.

Efforts to reach Oshiomhole to comment on the development proved abortive, as he was said to be meeting with his lawyers for guidance.

“Oshiomhole’s associate who wouldn’t want his name mentioned, said “the former APC national chairman is very busy at the moment. He will not talk to journalists now. He has even suspended all political engagements for now, including his support for Pastor Osagie Ize-Iyamu’s campaigns.”

According to an Edo-based political analyst, Mr Egbon Usoh, “The imminent arrest of Oshiomhole will mark the end of Ize-Iyamu’s ambition to be governor of Edo State.

“Oshiomhole as we all know is the force behind Ize-Iyamu in the ongoing electioneering campaign, though that force has been weakened substantially since his sack as the national chairman of the APC, so Oshiomhole’s arrest should worry the Ize-Iyamu’s camp.”

After FCCPC intervention, Man gets refund after paying for COVID-19 test in Nigeria, writes FCCPC management.

A Nigerian named Ndubuisi Ekwulonu Based in Sweden, who after paying N42,750 for COVID-19 test at the airport was made to pay another N42,750...
Read more
Inside Story

How General Abacha prayed for Bishop Oyedepo before his death

One of the best kept secrets from Church critics is the extent of generousity of Dr David Oyedepo and the Living Faith Church Worldwide...
Read more
Inside Story

The Edo State governor and candidate of the Peoples Democratic Party (PDP), Mr Godwin Obaseki, has said his second term ambition is not worth...
Read more
- Advertisment -