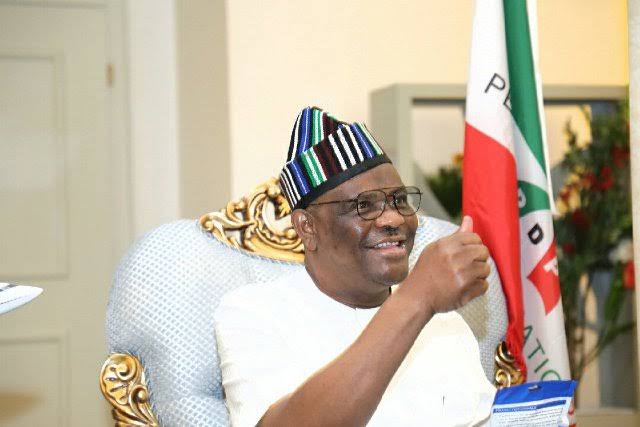 National coordinator, People’s Democratic Party PDP youths frontier,Comrade Usman Austin Okai has expressed satisfaction with the level of perfomance of River State Governor,Nyesom Nzewo Wike, saying he had made opposition party taken over the place of the ruling party in Nigeria in terms perfomance.

Okai made this remark on the background of his daily commissioning of developemental projects,stating that it is obvious the party, PDP which he belongs is proud of him,and no doubt will feature him in higher office in the nearest future.

He says the wonderful perfomance of Governor Wike amidst global health emergency of COVID-19 in second wave now, global melt down of economic recession in second lap in Nigeria, is a serious pointer to his distinct perfomance.

Comrade Okai says it baffles Nigerians that Governor Wike’s perfomance glaringly supercedes that of the Federal government, as no state government could do anything commensurate with River state, including those that enjoyed high IGR and other incomes.

The social critics emphasised that if performance and dividends of democracy through all round developement is the basis of electing people into public offices,then Governor Wike had done beyond the level of ordinary perfomance, to passion and emotions to do what is right to the society.

He appealed to PDP to explore not only the wealth of experience of Governor Wike,but his ability as a leader that can tackle myriads of challenges, perfomance in the midst of stern and bitter political rivlary in River state, and Nigeria at large.

He noted that River State Governor has through deliberate hardwork and extraordinary perfomance demistify the ruling party and it’s cohorts not only in River State,but Nigeria at large.

Okai begged the PDP to lay a solid foundation with people with passion to transform the entire fabrics of Nigeria like Governor Wike, in preparation for the 2023 general election.

He thanked Governor Wike for this feat,as the PDP frontiers in it’s entirety identify with him and his good works, towards the total transformation of the people of River State.

Dear Chiarman. I'm obliged to write this letter to you to express my concern over an issue that can earn us negative moral ratings as...
Read more
Politics