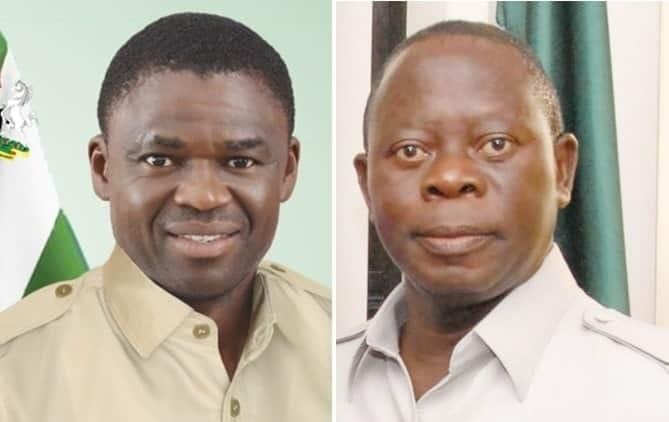 Deputy Governor of Edo State, Rt. Hon. Phillip Shaibu has apologised to Nigerians for the embarrassing manner Comrade Adams Oshiomhole, former National Chairman of the ruling All Progressives Congress (APC) has been portraying himself publicly in recent times.

READ ALSO: Edo 2020: Shaibu Will Crawl Back To Me For Forgiveness After Election- Oshiomhole

Speaking on Channels television programme ‘ Politics Today’, Shaibu who described Oshiomhole as his father said it is clear that the former Edo state governor is affected by law of diminishing returns, adding that his children, including himself will soon take him for proper medical treatment.

He said “Comrade Adams Aliyu Oshiomhole is not my former boss , but he is my father. I am ashamed that my father Oshiomhole will be fooling himself the way he is doing. I’m really ashamed because that is not the Oshiomhole that I call my father”.

“But I want to apologise to Nigerians on his behalf. There are certain age that you get to and law of diminishing return sets in. That is what is affecting my father, Oshiomhole. But we will take care of him as a good child”.

“We will find a way to get him to where we can check him medically so that he can return to the era when he was wearing khaki.

Now he is wearing safari and I think that is what has changed his mentality”.