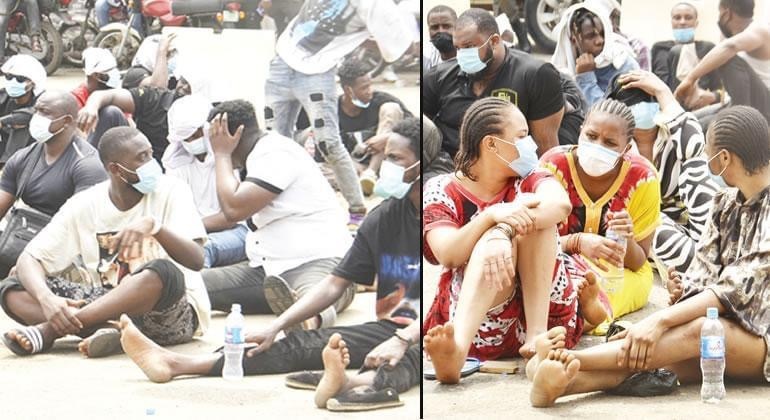 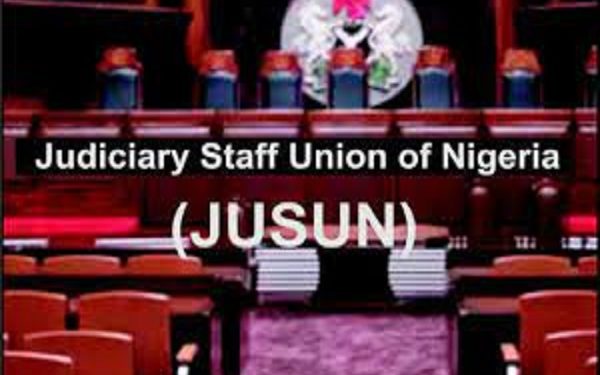 The Judiciary Staff Union of Nigeria, JUSUN, has urged President Muhammadu to direct the Attorney-General of the Federation and Accountant General to deduct monies standing to the credit of the judiciary.

The Deputy President of JUSUN, Emmanuel Abioye, told the News Agency of Nigeria in a telephone interview in Abuja.

We call on the President to invoke his powers under Executive Order 10, by advising the Accountant General of the Federation to deduct at source, all funds due to State Judiciaries, and to pay same directly to the Heads of Courts in States that have refused to comply with the Executive Order 10, as constitutional directives are non-negotiable,” he said.

NAN reports that the union had, on May 5, vowed that the industrial action embarked upon to demand financial autonomy for state judiciaries would not be called off until the governors complied with the constitutional provisions.

JUSUN had begun a nationwide strike on Tuesday, April 6, when the union directed all its members across the federation to shut down all courts after the expiration of the 21-day ultimatum earlier given over the failure of the government to implement the law.

However on May 6, after a conciliation meeting between the government negotiating team with JUSUN and the Parliamentary Staff Association of Nigeria, PASAN, the Minister of Labour and Employment, Dr Chris Ngige, expressed optimism that the workers’ union would soon call off the strike.

Also Read:  Our Judiciary could be in danger — CJN warns

They had fixed another meeting for Tuesday, May 11, for the unions to consult with their various National Executive Committees on the government proposal to their members.

My call to the Federal Government in this instance is that directive should be given to the public officer who is meant to carry out that assignment.

“In all these, we don’t even need the consent of the governors before the needful is done,” he said.

The union leader, who stated that Sections 121(3), 81(3) and 162(9) of the constitution clearly stipulated the autonomy of the judiciary and legislature, said it was disappointing that since Jan. 13, 2014, when the union got the Federal High Court judgment in its favour, the law was yet to be implemented.

What is needed is that the Accountant General of the Federation in conjunction with the directive of the AGF whatever ought to have deducted the money from the source,” he said.

President Muhammadu Buhari had, on May 22, 2020, signed into law an Executive Order granting financial autonomy to the legislature and the judiciary across the 36 states of the federation.

The Executive Order No. 10 of 2020 made it mandatory for all states to include the allocations of both the legislature and the judiciary in the first-line charge of their budgets.

The order also mandates the accountant general of the federation to deduct from source amount due to the state legislatures and judiciaries from the monthly allocation to each state, for states that refuse to grant such autonom

JUSUN Strike: Is the Judiciary Totally Helpless? What Does the ACJA 2015 Say -By Bayo Akinlade Esq 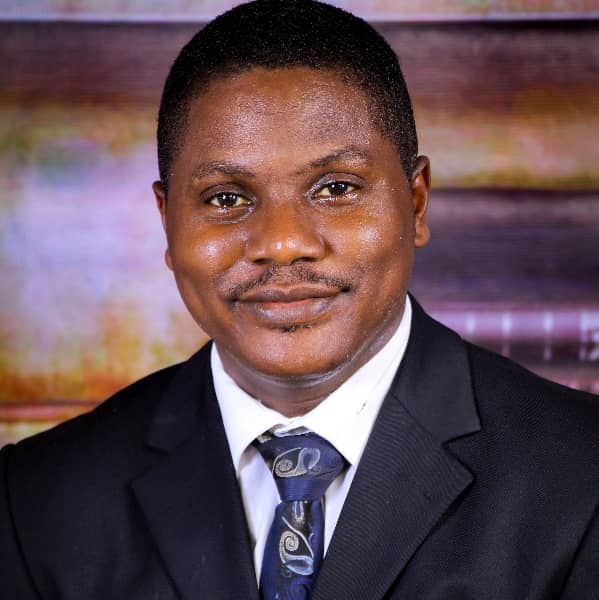 Many people think that the JUSUN strike has totally paralysed the administration of justice mechanisms in Nigeria but this is a serious misconception.

On the contrary, the JUSUN strike is merely a catalyst to looking at ways to reconsider the human interface with our justice systems. Let’s examine some advantages the JUSUN strike presents to us.

1. Delivery of Judgements and Rulings can be done via zoom. Hardcopies of these judgements can be sent via electronic means

2. Resolution of disputes. With the lockdown of the courts, litigants should explore mediation. Lawyers can conduct mediation sessions in their chambers, litigants can use the multidoor court houses or take advantage of the Office of the Public Defender, Citizens mediation Center and other private mediation processes

In Criminal cases,
Section 34 of the Administration of Criminal Justice Act 2015 provides that the Chief Magistrate or any magistrate designated by the Chief Judge for that purpose to conduct an inspection of police stations and other places of detention every month.

During the visit, the magistrate may:
(a) call for and inspect the record of arrests;
(b) direct the arraignment of a suspect, or
(c) where bail has been refused, grant bail to any suspect where
appropriate.

4. Pending Court cases can be resolved between parties during the lockdown of courts if Lawyers can just talk to their clients and to each other. There is no problem that can’t be solved with negotiation and a spirit of intent to solve our client’s legal problems.

What is stopping Magistrates from visiting Police detention centers? With the PDSS on ground and a volunteer group of lawyers to accompany them, they now have every support to carry out their constitutional responsibilities.

The Judiciary has been accused of many things including the fact that they know what to do but they are too lazy or they don’t care….I don’t want to believe this because these men and women on the bench are lawyers like me, they chose a higher calling on the bench, they gave up economic prospects to serve this nation, they gave up their social and political freedoms to live a life of seclusion and commitment to Justice.

I believe in many of our Judges and Magistrates. I have no doubt that they will be more effective if they had the independence to do what they are called to do.

Let’s think outside the box! 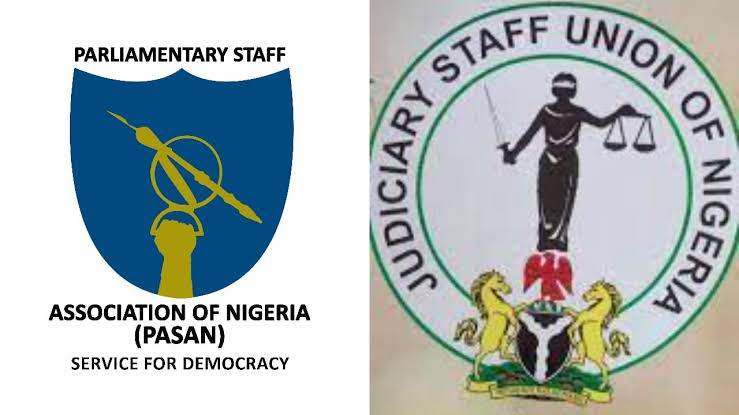 •Insist on implementation of full financial autonomy for judiciary, legislature

There seems to be no end in sight for the industrial action by the judiciary and legislative workers pressing for the full implementation of financial autonomy for the two arms of government in states as they have vowed not to compromise on their demands for the implementation of the 1999 Constitution as altered.

The workers, who have been on strike for about one month, said yesterday at a meeting with a federal government team, led by Minister of Labour and Employment, Dr. Chris Ngige, that the issue of financial autonomy for state legislatures and judiciaries was the constitutional provision that did not warrant any negotiation with governors.

The national leadership of the Judiciary Staff Union of Nigeria (JUSUN) and Parliamentary Staff Association of Nigeria (PASAN) also insisted that the governors must fully implement financial autonomy for the two arms of government in the 36 states of the federation as guaranteed by the constitution before the current strike will be called off.

Ngige said yesterday in Abuja that progress had been made on about 90 per cent of the issues in dispute.

However, the meeting between the federal government team and the leadership of the unions ended last night with an agreement that the unions should go and study the government’s proposal, while the meeting reconvenes next week.

But earlier, during the opening of talks with the federal government team and representatives of the governors, the Deputy Chairman of JUSUN, Mr. Emmanuel Abioye, said the unions still maintained their stance on the full implementation of financial autonomy for the judiciary and legislative arms of government in the states.

Also Read:  Our Judiciary could be in danger — CJN warns

Also, President of PASAN, Mr. Mohammed Usman, said the meeting availed them the opportunity to receive the fresh proposals by the governors, adding that the unions resolved to present the proposals to their national executive committees.

He stated that the unions would be reporting their decisions to the government at another meeting next Tuesday, adding that the strike will continue.

According to him, the governors only agreed to shift ground on the issue of ceding money for capital projects to the two arms of government.

“Aside from the ceding of capital projects, there is nothing new in the governors’ position. However, we are happy that the federal government has opened negotiations on the matter but we will not suspend the strike until there is agreement on the implementation of full autonomy,” he added.

Ngige, however, asked the workers to suspend the strike.

While welcoming the parties to the resumed negotiations, the minister said about 90 per cent progress had been achieved in harmonising issues with the governors.

Ngige expressed optimism that the strike would soon end.

He said the government side had made offers to the two unions for them to consult with their various National Executive Committees and revert back.

According to him, a lot of work went into the proposal given by the government side to the two unions, which substantially addressed their demands for judicial and legislative autonomy in the 36 states of the country.

The minister stated that the proposal was produced by the committee of the government side, comprising the Solicitor-General of the Federation and Permanent Secretary, Federal Ministry of Justice, Mr. Dayo Apata (SAN); the Secretary of the Presidential Committee for the Implementation of Judicial and Legislative Autonomy, Senator Ita Enang; representative of the National Judicial Council (NJC) and the Director-General of the Nigerian Governors Forum (NGF).

Ngige said: “A lot of work went in. We have exchanged briefs with the JUSUN and PASAN. They have their demands, which they had earlier submitted. The government side has given counter offers and properly addressed the burning issue of financial autonomy for state legislatures and judiciary.”

He stated that questions were asked and answered, while observations were made and explained, working on the proposal given by the government side.

Ngige said the meeting had been adjourned with a view to enable JUSUN and PASAN to take back the government proposal to their members for consideration.

Ngige said the discussions were fruitful, adding that they have moved from the initial position of ground zero, to ground 85.

He, however, appealed to the striking workers to return to work to enable the government to meet the remaining part of their demands.

“Besides, we are menaced by bandits, terrorists and arsonists. With the courts closed, the police cannot tackle insecurity,” Ngige said.

Senior Special Assistant to the President on Niger Delta Affairs, Senator Eta Enang, who also spoke at the opening talks with representatives of JUSUN and PASAN, said the suspension of the strike had become necessary to enable the legislatures to pass legislation needed to ensure the smooth implementation of the financial autonomy.

“I just want to appeal to JUSUN and PASAN that we did not undertake all these efforts in vain and that when we arrive at a certain decision at the end of the technical session, you will be able to hit the ground running. We plead that you call off the strike because we will not be able to pass the necessary laws if the legislative houses remain closed,” he said.

According to him, from the engagement so far with the governors, he believed that the gap was being closed.

Enang stated that President Muhammadu Buhari had told the governors to do what was right to the judiciaries and legislatures in their states just as was being done at the federal level.

“The president is saying to the governors, go and treat the state legislature and judiciary arms the same way we treat the National Assembly and the judiciary at the federal level,” he added.

When asked to comment on the outcome of the meeting, Abioye said they were going back to meet with their National Executive Committees to study the situation and consider the offers made before reverting back to Ngige.