Protest In Access Bank, Sacked Over 1,000 staff refused to pay-them -off declaring a profit of N102.3billion 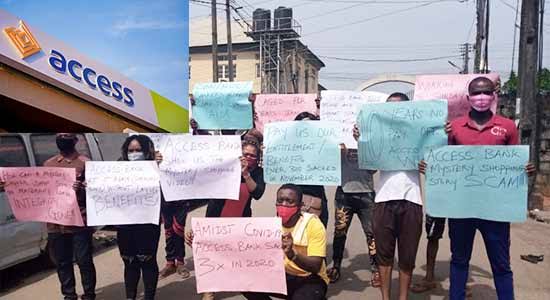 Dozens of workers sacked by Access Bank last year, on Wednesday morning, stormed the entrance of the Bank headquarters in Lagos, demanding complete payment of their entitlements.

The protesting staff, who were outsourced by different companies including: Workforce Management Center, Vic Lawrence & Associates Limited, Integrated Corporate Services Limited, U-connect, Strategic Outsourcing Limited and C & I Outsourcing among others, were sacked in May, 2020 in the wake of the deadly COVID-19 pandemic.

They accused the bank of sacking over 1,000 staff without pay-off after declaring a profit of N102.3billion.

The protesters carried placards with different inscriptions including: “Access Bank, where is your integrity”, “Access Bank, don’t let me unleash my family problem on you” and “Access Bank, pay us our entitlements” among others.

One of the protesters, Ojo Abiola, said he was employed by an outsourcing firm named C & M Exchange on February 5, 2012 and was later moved to Workforce under Diamond bank due to the merger with Access bank.

Abiola said the termination of employment took place on May 1, 2020 when COVID-19 was biting hard.

According to him, the bank gave ‘restructuring’ as reason for the termination.

He also disclosed that N30,000 was paid per years of service, which he said was too small and was also not paid fully.

Life since the termination he said has not been easy as all his efforts to get another job has not yielded any positive result.

“I am a family man, imagine, a man without a job, life has not been easy.

“When I was sacked, I was paid N180,000, which does not commensurate with the number of years I have served the company. We want more, N30,000 cannot pay for house rent, shop rent and can’t even start up any reasonable business,” he lamented.

He appealed to government and all relevant stakeholders to call Access Bank to order and make the right payment that corresponds with the work done.

“There are people among us who have worked with the bank for more than 10 to 20 years.

Abiola said that the outsourcing firms are not saying anything about their predicament.

Findings, however, revealed that a meeting has been scheduled between management of Access Bank and the protesting sacked workers later in the day.

Success Story Of Development Bank of Nigeria Amidst Second Wave Of COVID-19 Pandemic.

Development Bank of Nigeria DBN is statutorily charged with providing access through funding to enterpreneurs,small scale and medium term businesses, through the MSME's and...
Read more
Business