Home Sports Ronaldo criticizes for not wearing a mask while watching Portugal.
Sports

Ronaldo criticizes for not wearing a mask while watching Portugal. 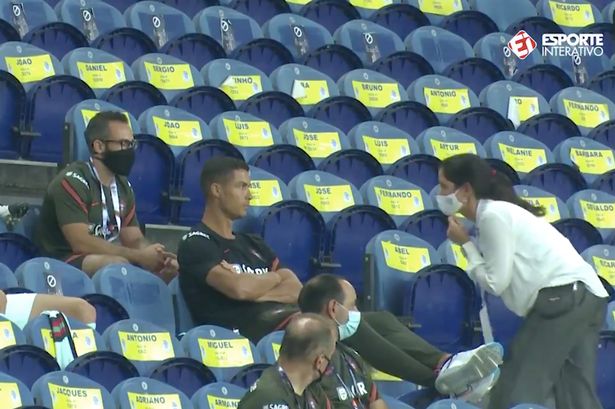 Cristiano Ronaldo was reprimanded for not wearing a mask while watching Portugal in the Nations League on Saturday night.

Ruled out of the game against Croatia with a toe infection that has been likened to a bee sting, Ronaldo was forced to sit in the stands as he saw his nation claim a convincing 4-1 victory.

Goals from Joao Cancelo, Diogo Jota, Joao Felix and Andre Silva wrapped up the comfortable win for Portugal, who have now won nine of their last 10 matches.

During the game, Ronaldo inevitably drew plenty of attention after a stadium official was filmed approaching the 35-year-old to remind him to put on a mask as part of coronavirus protocol.

While seemingly not to pleased by the distraction, the Juventus attacker quickly complied and put on a mask as he watched the remainder of the match.

Portugal next face Sweden on Tuesday night with manager Fernando Santos conceding on Saturday that Ronaldo may not be fit in time to feature.

“I wasn’t resting him. If he was in good shape, he would have been [in the starting XI] able to play the game,” Santos told RTP.

“Today he trained, feels better and, at the moment, he will travel to Sweden. Then we’ll see. There is no injury, but he has to recover from that infection.”

Santos’ side managed to impress without their biggest star against Croatia and it came as no surprise to their coach.

“From what they did during the week, they showed me this was possible. This team knows each other well, the job was to remember what has been done before,” Santos said.

“The team corresponded, 100 per cent. There were some less good periods, but that is part of football.”

Portugal are looking to defend their Nations League title after winning the inaugural edition last year when they defeated the Netherlands 1-0 in the final.

Ronaldo helped lead his country to that final in June, having netted a hat-trick against Switzerland in a 3-1 semi-final win.

The Juventus star’s next match for Portugal could see him score his 100th international goal with Ronaldo currently sitting on 99 strikes across 164 games for his country.

Liverpool and Chelsea both in talks over potential Barcelona transfer raid

Liverpool and Chelsea have reportedly both made approaches over a potential transfer deal for Barcelona youngster Alejandro Balde. The talented young left-back looks to be...
Read more
- Advertisment -

President of the Senate, Ahmad Lawan on Thursday advanced reasons why the senator representing Adamawa North, Senator Elisha Abbo, defected to the ruling All...
Read more

There was tension as patient who was declared dead and taken to the Kapkatet sub-county hospital mortuary, Kenya suddenly ‘resurrected.’ A morgue attendant is said...
Read more

Ronaldinho, a Brazil football legend, has reacted to the death of Diego Maradona, the world renowned football hero. Ronaldinho, who expressed sadness over the passing...
Read more

Why Sen. Abbo of ‘sextoy shop’ infamy defected to APC, by...