The Battle Of SANs:Olusola Oke to face incumbent Akeredolu,for APC ticket Ahead of Ondo Governorship Poll 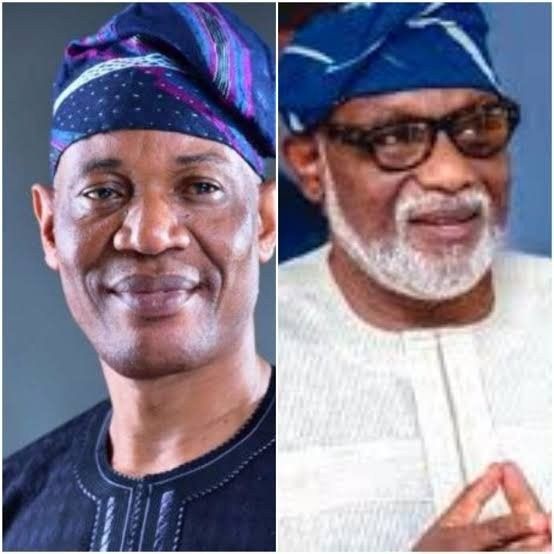 As the jostling for who becomes the Governor of Ondo State in the forthcoming October 10 governorship election thickens, the All Progressives Congress (APC) Unity Forum, on Tuesday, announced Olusola Oke as its candidate to face the incumbent governor, Oluwarotimi Akeredolu at the party governorship primary in the state.

Former Deputy Governor of the State and Leader of the factional group, Ali Olanusi, disclosed this in a statement he made available to journalists in Akure.

However, the secretary to the selection committee has dismissed Olanusi’s report, describing it as fake.

According to Olanusi, Chief Oke contested with nine other aspirants to emerge the unity forum’s candidate.

Oke contested the seat in 2012 under the PDP and 2016 under the AD but lost to former governor, Olusegun Mimiko and the present governor, Akeredolu, respectively.

READ ALSO: Gambari’s success will depend on how he deals with forces around him – Experts

Olanusi’s statement reads: “Gentlemen of the press, considering the mood of the state and continuous ban on political meetings and the fact that INEC has given its nod for electronic campaign, we hereby present to the public the long-awaited report of the Ondo APC Unity Forum concerning its governorship aspirant for the 2020 governorship election in Ondo state, as presented by the Gubernatorial Candidate Selection Committee.

The APC factional group chairman posited that “during the meeting of the Aspirants on March 23, 2020, a unanimous decision was taken by all the Aspirants that the 7-man Gubernatorial Candidate Selection Committee should come up with a candidate to represent the Unity Forum in the Ondo State 2020 General election.

“This is due in part to the failure of the Aspirants to reach a consensus on a person to represent them as a candidate. In taking this unanimous decision, all the ten (10) Aspirants, Dr Segun Abraham, Barrister Olarewaju Kazeem, Barrister Bukola Adetula, Prince Dapo Adelegan, Mr Adelami Olayide Owolabi, Mr Akintunde Akinsewa Awodeyi, Barrister Mrs Jumoke Anifowose, Chief Olusola Oke, Engr Ife Oyedele and Prince Jimmy Odimayo agreed to accept the candidate recommended by the Committee. However, one of the Aspirants insisted that he must be convinced that the process would be credible.

READ ALSO: Covid-19: The CDS, CNS, &IGP at the National Security meeting with their uniformed facemask

“Consequently, on March 24, 2020, six members of the committee met and one was unavoidably absent. They debated on the issue of presenting a candidate in line with the Committee’s terms of reference and the concurrence of the aspirants.

But, the Secretary of the 7-man Selection Screening Committee of the group, Sola Ehindero dismissed Olanusi statement describing it as fake report from an unauthorised person.

Ehindero, in a statement issued said, “As Secretary to the Committee and custodian of all its delineations and records of the committee, I wish to call the attention of all members of the Forum in particular and the public at large to the following that Alhaji Ali Olanusi is not appropriately qualified and morally empowered to issue any report on the committee’s deliberations mainly because he is currently a principal suspect in a bribery allegation related to the integrity and credibility of the report of the screening committee.

“As of today 12th May, 2020, no consensus candidate has been elected by the committee for which I am Secretary. Hence, the report that has been fraudulently released by Ali Olanusi neither emanates from the accredited secretary’s office nor does it reflect the true deliberations and conclusion of the members of the screening Committee.”