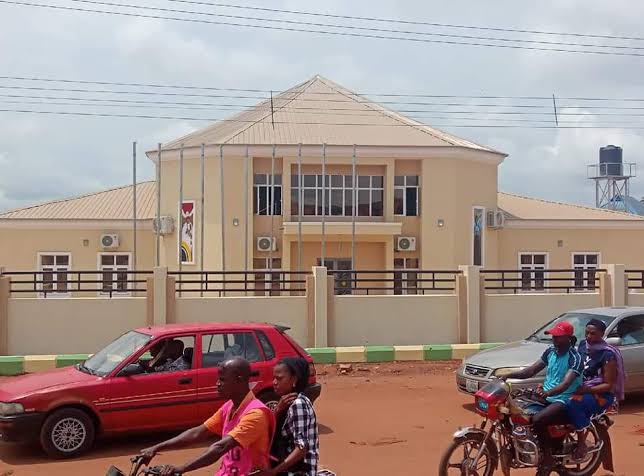 The filthy fogs in ICDA HOUSE Anyigba, is unbecoming as the nauseating protuberance emanating from the odiferous sepulchre has become an unhealthy receptacle that comes with a simulacrum dirge in the annals of our checkered history.
The harlotry Dome otherwise referred to as Igala house with its adulterous couch has become a reprobative Golgotha where unbridled rivalries, unholy manipulation and feckless competition is now in vogue.
ICDA house Anyigba as an alternative palace to the Ata’s palace Idah and that certain morons under selection or election whatsoever are now the defacto Ata Igala and could install every Dick’s and Harry’s as commander and whatever numenclature deemed necessary to their cohorts?
This buttress the simple fact that we now have bastards all over the place parading themselves as Igala son’s which is why the sell out.
The so-called Igala house in Anyigba for me is just like every other Town Hall meant to serve the interest of any COMMUNITY.
Anyigba is a community in Igala land and this house should be called Anyigba town hall or at best Ogohi Anyigba civic centre.
It’s only fools like those who sanctioned the numenclature Igala house that will foolishly carry out foolish things in the said Igala house as we have seen lately.
How on Earth will any right thinking Igala man go to a house to be honored in defiance to Ata’s order?
Yet you call this house Igala house?
I’m sorry for those self seeking individuals who are always bent on causing troubles in our land. Recognition only comes from God and not by man in whatever guise.
Association meant to promote Igala culture is now being used to degrade same in the name of power play?
Woe unto them that disregard the rule of law especially those coming from a constituted authority.
Ata stool is a statutory authority with traditional backing as it were.
All those infidels dragging our feet as my chairman would put it are not only swimming in a pool of muddy water but surely they shall get drowned in no distance time from same.
I foresaw this coming the moment those rogues started installing their goons in the name of celebrating them.
There is nothing like Igala house at Anyigba but a save haven for the gathering of traitors and their cohorts!
No appology as it only a bastard who will go against his master’s order!
Who the hell are these vultures and whose interest are they serving?
It’s only the palace that can honor anyone with any title in the kingdom as the ongoing charades by those fifth columnists and their notorious den cannot impose anyone on the Igala race.
You’re looking for honor yet you disrespect the STOOL?
You’re a bat without legs and buttocks!
Nature abhors your traitorous shenanigans and has forsaken you and your household.
You’re being dressed in a borrowed robe and shall be unclothed or derobed in the market square with shame!
Posterity will knock at the gate sooner than later.
Those bent on this unholy division will have their individual homes divided and scattered abroad to be able to make us believe in their ill-conceived division.
On one Igala kingdom we stand as those poltroon renegades shall continue to wobble in total hallucinations.

Of Corruption And State Ownership Of Refineries BY DINO MELAYE

Vice President Yemi Osinbajo had two days ago said the problems associated with Nigeria’s refineries will not go away if the Federal Government continues...
Read more
Opinion

There is no doubt God spoke through the people of Edo state on saturday. The phrase, “Vox populi, vox dei”, found meaning in that...

Some factors that led to the outcome of the elections, in my own opinion, are as follows: 1. The APC primaries. Result of the APC primaries...
Read more
- Advertisment -

President Muhammadu Buhari has come under fire for allegedly authorizing the use of the Presidential Jet for the wedding of one of his aides,...
Read more