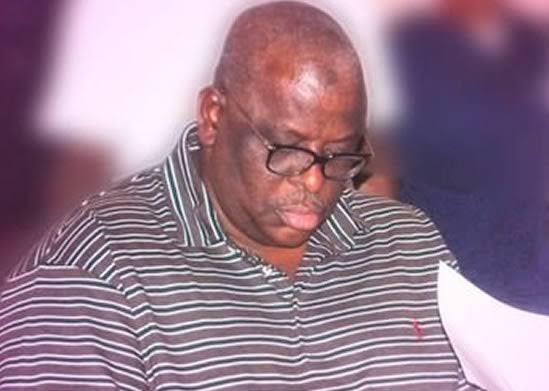 The remains of late Senator Buruji Kashamu have been laid to rest, today, Sunday, August 9, at about 12:45pm, in his Ijebu-Igbo home, OBSERVERS TIMES reporter learnt

It was however, observed that sympathisers of the late Senator who died of Covid-19 complications, defied the social distancing order by the Federal Government, as they bade farewell to him.

The crowd could not be controlled by Security Agents, when the body was brought out from his building.

The Janazah prayer was led by Sheik Mikail Sile Rufia, the Mufti of Ogun State.

The Ogun State Governor, Dapo Abiodun, was among the symphatisers who paid a condolence visit to his family.

Governor Abiodun arrived at Senator Kashamu’s home at about 10:39am, in the company of some of his cabinet members.

Speaking with Journalists after his visit, the Governor described his friend of 25 years as a courageous, passionate, and cheerful giver.

He added that the State political landscape would not be the same without him.

His words: “Senator Buruji is someone I have known for the past 25 years. He was very courageous, passionate, and most importantly, a cheerful giver, especially to the needy.

“We pray Almighty will accept his soul, forgive his sins, and grant him eternal peace.”

In his tribute, former Senator Adegbenga Kaka described the death of Kashamu as a loss, saying that he lived his life in the way God wanted him to live.

He prayed that God forgives his shortcomings, and grants him eternal rest.

Dr. Reuben Abati, who was Kashamu’s running mate during the 2019 Gubernatorial election in Ogun State, stated that the late Politician was “grossly misunderstood” in his lifetime.

He also described him as “a very kind and large-hearted man”, who invested in the lives of the less privileged across the State.

Abati, however, expressed concern that a number of those who benefitted from him politically, failed to show up at the burial.

Meanwhile, a three-time member of the House of Representatives, Hon. Abiodun Akinlade, in his condolence message, said that Kashamu’s departure came when his political experience and services were most needed in the State.

“Prince lived a life worthy of emulation, as a man of strong conviction, versatility, brilliance, and philanthropic gestures. Ogun State has lost a man of strong will, and a good fighter. A man you must love to hate, and hate to love.

“His sudden demise will in no small way affect numerous people, especially the downtrodden, his political, business associates, and family members”, he said.

Those present at the burial were the Senator representing Ogun-East Senatorial District, Senator Lekan Mustapha; a former Deputy Governor of Ogun State, Prince Segun Adesegun; and the State Commissioner for Environment in the State, Hon. Abiodun Abudu-Balogun.

Many of Kashamu’s Political Associates were conspicuously absent at the burial.

The widow of the deceased, Susan, and his children, wept uncontrollably, as the body was lowered in the grave.