You can’t extend your political empire to Edo, Obaseki Firesback at Tinubu 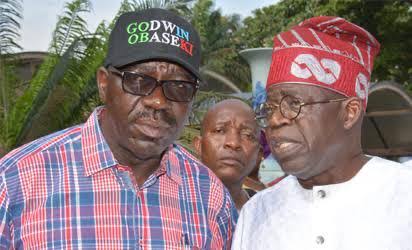 The Governorship candidate of the Peoples Democratic Party in the Edo State Election, Godwin Obaseki, has faulted claims made by the National Leader of the All Progressives Congress, Bola Ahmed Tinubu, in a televised broadcast on Tuesday.

Obaseki said this in a press statement by his Special Adviser on Media and Communication Strategy, Mr. Crusoe Osagie.

The statement was titled ‘You can’t extend your political empire to our state – Edo govt tells Tinubu’.

Obaseki boasted that Tinubu cannot extend his political empire to Edo State, noting that Edo people were determined to end godfatherism in the state.

In the broadcast, Tinubu had said Obaseki does not deserve a single vote in Saturday’s election, asking voters to reject the PDP candidate.

Reacting, the statement read, “Our attention has been drawn to a television broadcast in which a former Lagos State Governor and chieftain of the All Progressives Congress, Asiwaju Bola Ahmed Tinubu, in his quest to extend his political dominance and empire to Edo State, decided to take over the role of Edo people to choose through the ballot who to govern them for the next four years.

“It has become obvious that the spirited fight which Edo people have put up against godfatherism has sent tremors beyond the shores of Edo to the likes of Tinubu, who has for years sustained a stranglehold on Lagos and other states in South-Western Nigeria, hence this desperate, last-ditch effort to rescue the unproductive political instrument, now popularly referred to as godfatherism, with which he has feathered his nest and built his political empire at the expense of the people.

Tinubu knows clearly that come September 19, when godfatherism would have been dismantled in Edo State, the people of Lagos may just have found the recipe and formula for removing the chokehold placed on their collective destinies for decades by Tinubu, hence the inciting television broadcast.”

Obaseki described the allegation that he prevented the inauguration of lawmakers in the state as “false”.

“We call on all Edo people, friends of Nigeria and all lovers of democracy to disregard all the comments by Tinubu, as the allegations about the Edo State House of Assembly and other claims in the broadcast are completely false,” he added.

The crisis in the Edo State House of Assembly began when it was inaugurated under controversial circumstances at night with only nine, out of 24 lawmakers-elect, on June 17, 2019, following a proclamation by the governor.

The lawmakers, who were not part of the process, as well as the APC, rejected the process and called on the governor to issue a fresh proclamation.

However, a Federal High Court in Rivers State barred the governor from doing so. A separate court also barred the National Assembly from taking over the Edo Assembly.

This worsened the crisis within the APC in the state and deepened the feud between Obaseki and his predecessor, Adams Oshiomhole, who was also the National Chairman of the APC.

The governor orchestrated the suspension of Oshiomhole from the party at the ward level. In retaliation, Oshiomhole ensured that Obaseki did not clinch the governorship ticket of the APC and Pastor Osagie Ize-Iyamu emerged as the winner of the primary.

The crisis in the Edo State chapter of the APC and the multiple court rulings on Oshiomhole’s suspension snowballed into a national crisis that culminated in the President, Major General Muhammadu Buhari (retd.), dissolving the National Working Committee of the APC causing Oshiomhole to lose his position.

An attempt by the aggrieved lawmakers to be inaugurated was, however, scuttled by men claiming to be renovating the Assembly complex.

However, the APC claimed the men were thugs hired by the governor who was afraid of being impeached.

As the clock ticks towards 2023, the supremacy war between the Minister of Niger Delta Affairs, Senator Godswill Akpabio and the Secretary of the...
Read more
Politics

Governor Godwin Obaseki has commended the Edo people for his re-election. He described his re-election as “triumph over godfatherism”. He said, “Words fail me in saluting...
Read more
- Advertisment -

Governor Godwin Obaseki has commended the Edo people for his re-election. He described his re-election as “triumph over godfatherism”. He said, “Words fail me in saluting...
Read more
Load more